WARNS AKALIS, OTHER NATIONS AGAINST ATTEMPTS TO PLAY DOWN SFJ THREAT 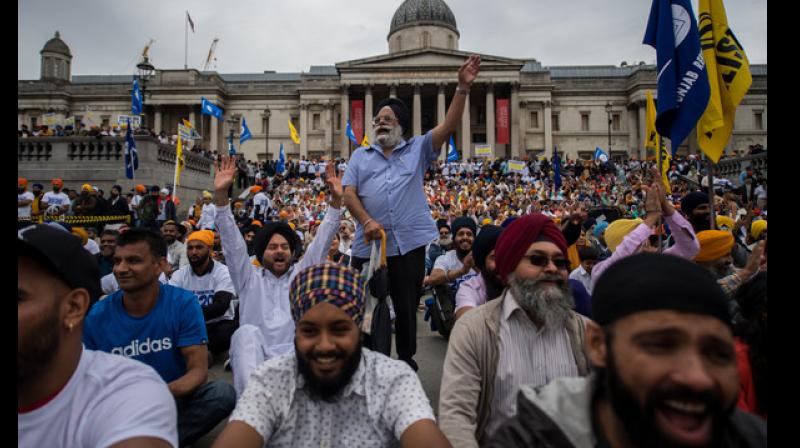 Chandigarh, July 10: Punjab Chief Minister Captain Amarinder Singh has hailed the decision of the Union Cabinet to declare the Sikhs for Justice (SFJ) as an unlawful association, describing it as the first step towards protecting the nation from the anti-India/secessionist plans and designs of the ISI-backed organisation.

Though the outfit deserved to be banned outright as a terrorist organisation, the Government of India had at least taken a long-overdue stand against SFJ, which had unleashed a wave of terror and fear in Punjab in recent years, said Captain Amarinder, in a statement issued here on Wednesday.

With this step, the Centre had finally shown its much-needed intent to crack down on the organization, which was covertly being backed by Pakistan’s ISI in its conspiratorial campaign over ‘Sikh Referendum 2020’, launched in 2014, said the Chief Minister. He, however, asserted that the central government would have to take more proactive measures to crack down on SFJ and its affiliates/operatives in the interest of national security.

The recent years had seen blatant attempts by SFJ to radicalize, fund and motivate some poor and gullible youth of Punjab into committing acts of arson and violence, Captain Amarinder pointed out, adding that the outfit had also been making efforts to enlist the support of gangsters and radicals in Punjab and exhorting them to fight for the ‘liberation of Punjab’ from the Indian government.

Captain Amarinder came down heavily against those trying to play down the vile threat posed by SFJ, which continues to flex its muscle not just within but also outside India, as manifest in the June 30, 2019, incident. On the day, UK-based SFJ activists were in the spotlight during the India vs. England World Cup cricket match at Edgbaston (Birmingham). Pamma and his associates were seen wearing T-shirts of Referendum 2020 and waving the Khalistani Flag at the Cricket match.

In a highly secessionist act, SFJ also shared a poster on social media just last week urging pro-Khalistani Sikhs to boo the Indian Team during the Semi-Final match against New-Zealand on 9th July 2019.

The Chief Minister said these incidents totally negate the ridiculous stand of SAD and its leaders, as evident in the statement of party spokesperson Daljit Singh Cheema that Khalistan was no longer an issue. Pointing to the gravity of the issue, Captain Amarinder urged the Akalis to refrain from playing petty politics over it, and instead to join the government in fighting and eliminating the menace.  The Akali leaders seemed to be willfully ignoring the vicious agenda of SFJ, showing how little they cared about the interests of Punjab and its people, said the Chief Minister.

Captain Amarinder also exhorted the global community to support India’s efforts to understand and counter the SFJ’s secessionist and violent agenda and gameplan, which had been cleverly shrouded behind a supposedly non-violent Referendum campaign. Any country allowing SFJ to use its soil for destabilizing India would also suffer the consequences of such an act as no nation could remain unaffected as a result of supporting terror or violence against another, he added.

The Punjab Police, over the last 3 years, had registered several criminal cases against such youth as well as SFJ leaders/operatives based in various countries and working under the command of SFJ promoters, operating from USA, Canada, UK, Malaysia etc. The recovery of arms and ammunition from apprehended youth/operatives has exposed a major network, spread across various south-eastern, western and even African countries, and using money transfers over MTSS or hawala channels to finance the violence and illegal activities.

The Chief Minister said SFJ had even tried to instigate Punjab Police personnel to revolt against the state government, besides issuing threats and intimidating Punjab Chief Minister, Punjab Jails Minister and senior police officers of Punjab, including many former/ present DGP. Besides, the outfit had been targeting Sikh Army soldiers through a dedicated social media campaign and instigating them to desert the Army and work for promotion of Referendum-2020 instead.

More recently, a strong nexus between SFJ and Kashmiri separatists had come to light, suggesting a wider net that goes beyond Punjab, with serious repercussions for national security, said the Chief Minister, adding that what had so far been exposed was only the tip of the iceberg. The SFJ evil goes deep and needs to be eliminated from its roots for the protection and preservation of the national security and territorial integrity safety of India, particularly Punjab, he added.