My body is my own, no one, even my husband, has the right to touch it against my will

My body is my own, no one, even my husband, has the right to touch it against my will 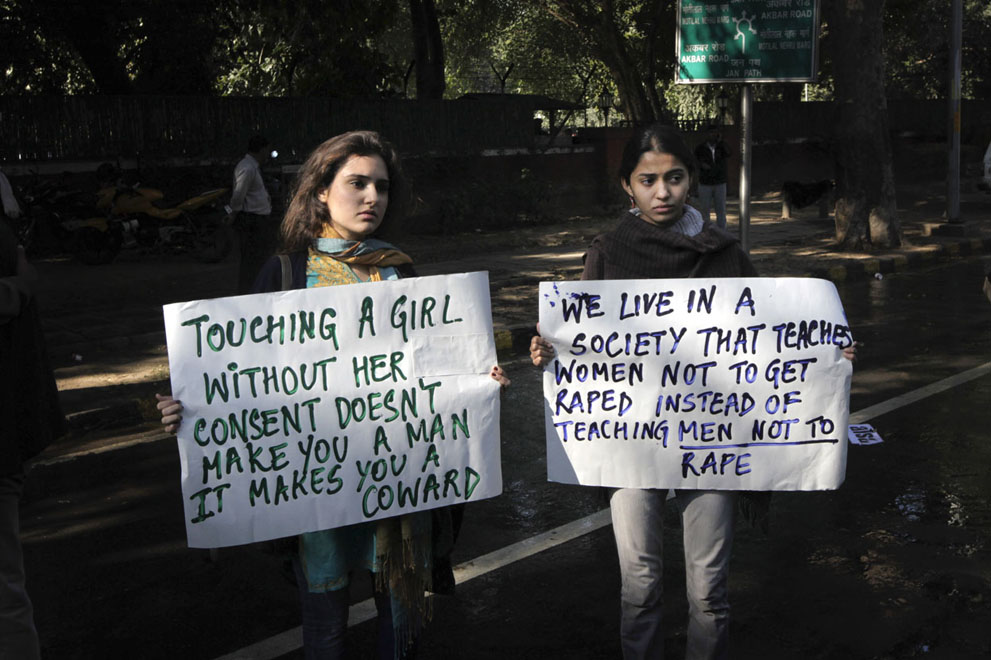 Swaraj Kaushal, no doubt intending to defend the very patriarchal mind-set in our country, unwittingly uttered a momentous truth about its ground reality when he tweeted in the context of the recognition of marital rape as an illegal act, â€? There will be more husbands in jail, than in the house.â€?

The UN Population Fund supports his statement when it states that more than 2/3rds of married women in India aged between 15 and 49 have been beaten, raped or forced to sex. But should the men be made to pay? Of course not.

How far are we as a nation willing to continue to allow women to pay the price so that we could uphold the sanctity of marriage? And when are we going to answer the question posed by so many married women of our country: how sacrosanct is a union where one partner can be violated at the whim of the other; physically, mentally, emotionally? What is â€?sacrosanctâ€? about that union? Women wonder. Donâ€™t men?

â€?Even if there is a law in place, women will not use it and file complaints of rape against their husbands.â€? says Maneka Gandhi. Is this reason enough to deny women even the existence of this right, then? Is the supposed docility of women and their cultural shame in exposing their husband a reason to use this fact against them?

If â€?sanctityâ€? of marriage is the excuse, then perhaps the government should ensure than the virtuousness of the union is made available to both partners. Being sexually violated, being forced against your will to provide sex does not make for a â€?holyâ€? union.

If fear of misuse of such a law is the excuse, then we should use that for any and every criminal act. Any criminal act needs to be proved, it requires investigation by the police and a final judgement in the courts. So why is that while giving this fundamental right to their own bodies to married women over the age of fifteen, suddenly the police and judiciary are supposed to become helpless and unable to separate the chaff from the grain?

The only criminal remedy available under the Indian Penal Code to the wife is for cruelty, which covers both physical and mental harassment, and which attracts a maximum punishment of three yearsâ€™ imprisonment with fine. In most instances, however, cases drag for years, and many give up the fight.

Ironically, Section 122 of the IPC prevents communication between husband and wife during the marriage from being disclosed in court unless a partner is being prosecuted for an offence against the other. But since marital rape is not recognised as a crime, the wifeâ€™s evidence cannot be admitted, making the proving of it an almost impossible task. That is basically all that the wife is asking here as a citizen of this country: a chance to be able to prove what she is undergoing in order to seek justice.

Stating that what â€?may appear to be marital rapeâ€? to a wife â€?may not appear so to othersâ€?, the central government took a stand against criminalising marital rape, in its affidavit to the Delhi High Court on Monday. The Supreme Court, in a nine-judge bench ruling has declared privacy to be a fundamental right of every Indian citizen.

Why must married women above the age of fifteen alone be denied this fundamental right? The judgement recognises the importance of the autonomy of the individual when it states that â€?the bodily privacyâ€?implicit in this is the negative freedom of being able to prevent others from violating oneâ€™s body.â€? What reason is there, then, to deny this right to its own citizens, no matter that they are women? Misplaced patriarchal sentiments have pandered too long and too much to the needs of men at the cost of womenâ€™s rights and dignity.

Why are we so ready to offer women up for sacrifice in this country? Why are the men to be handed down this sense of entitlement towards a womanâ€™s body, notwithstanding the fact that she is their spouse? It is like a spoilt boy being told, â€?Here, this a wife, use her as you will, and no one will object.â€? We pander to menâ€™s sexual urges and perversions and their need to vent their aggression, because, of course, in this country, â€?boys will always be boysâ€™. But who is to hear the screams of women who suffer in the privacy of their homes? Who will answer them?

We know and acknowledge the hideous face of rape. Rape by a stranger is horrifying, we readily agree. But rape and assault by the person you live with, with whom you share a life, for whom you cook, whose face you wake up to, whose children you bearâ€?.how is that continuum of horror any less? By what strange logic do we turn our eyes away from that woman? Because it is too horrible to face? Because, if we do, we might have to face the darkness that lies within the supposed â€?sanctityâ€? of our marriages?

Swaraj clarifies his initial tweet by another, saying, â€?There is no such thing as marital rape. Our homes should not become police stations.â€? It is shocking to read these words. Is denial going to make what happens to women in the one place they should feel safest disappear? What would he call what happens to women in the secrecy of bedrooms when they are battered, bruised, their self-esteem shattered, their bodies invaded, when they are broken and used? A manâ€™s right?

In this democracy we live in, where everyone under the Constitution is supposedly given the right to live with human dignity, can not married women above the age of fifteen ask for the same? Can they not say, â€?I may be married, but my body is still my ownâ€™?