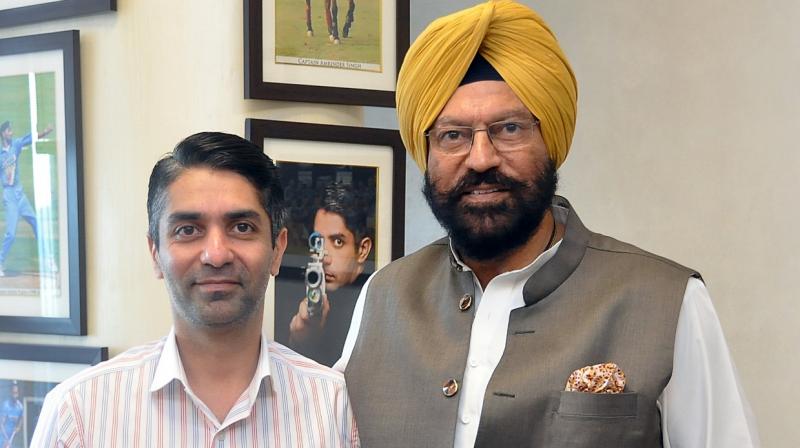 Chandigarh : The Sports landscape in Punjab is set to witness a transition with new initiatives being undertaken in Sports Science and Technology, facilitated by Abhinav Bindra Targeting Performance, India’s leading High-Performance Centre. The brand, an initiative by Beijing Olympic Games Gold Medallist Abhinav Bindra, makes use of the technology that was used by him during his training.

Disclosing this here today while interacting with Padma Bhushan and Rajiv Gandhi Khel Ratna Award Winner Abhinav Bindra at his office at the Punjab Civil Secretariat, the Sports and Youth Affairs Minister, Punjab, Rana Gurmit Singh Sodhi said that the Punjab Government would also make use of the abundant talent and expertise of Abhinav Bindra to guide budding athletes in the new Sports University coming up in Patiala District.

Abhinav Bindra and Rana SodhiThe Olympic Champion on the occasion also saw the gallery of photographs of eminent sportspersons, including his displayed in the minister’s room, who have carved out a niche for themselves as well as brought laurels to Punjab. The minister also recalled the memories of Beijing Olympics (2008) in which Abhinav Bindra won India’s first Gold Medal in Individual category and where the minister was also present.

The minister also recalled the journey of Abhinav Bindra from his days at the Doon School right till his becoming Olympic Champion.  Divulging more about the arrangement with ‘Abhinav Bindra Targeting Performance’, Rana Sodhi disclosed that proposals have been made to establish a new High-Performance Centre that can assess and Train the Physical Parameters of an Athlete using Data, and Real-Time Visual Feedback.

The Technology would enable athletes to access Sport-Specific training routines customized for them by a team of Sports Medicine Consultants Physiotherapists, Sports Scientists, and Data Analysts. The minister further added that the State Government will be looking to support the Plan with the help of a Corporate Sponsor. Such initiatives, he added would certainly steer Punjab towards glory in the sporting arena.