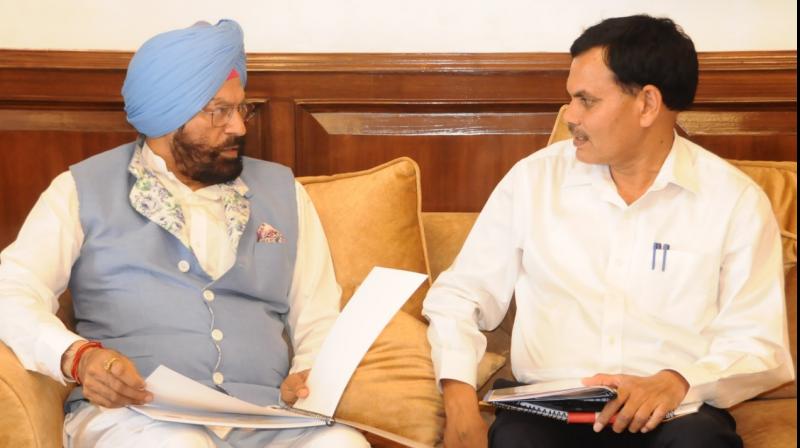 Chandigarh, June 12: “The Punjab Government would extend invitation to the 550 NRI Punjabis on the occasion of the 550th Parkash Purb celebrations of Sri Guru Nanak Dev Ji to be held during November, 2019.” This was disclosed here today by Rana Gurmit Singh Sodhi on assuming charge as the NRI Affairs Minister, Punjab. On the occasion, Rana Sodhi who is also the Sports and Youth Affairs Minister held first meeting with the senior officers of the department.

Rana Sodhi said that the CM, Captain Amarinder Singh is in the process of chalking out since last year detailed programmes which would culminate in November, 2019. The minister also said that it has also been decided to invite 550 NRIs to in order to enable them to witness the historic celebrations. Divulging more, the minister said that the arrangements of boarding, lodging as well as transportation would be made by the Punjab Govt. He also said that these NRI Punjabis would be taken to visit Sultanpur Lodhi, Batala and Dera Baba Nanak.

Rana Sodhi also directed the officers to formulate an effective mechanism for speedily redressing the grievances of the NRIs pertaining to the property and marriages. The minister also said that there should not be any delay in providing justice to the NRI community. Divulging further, he said that the cases connected with the property fall under the Revenue Department and he would ensure that contact is established as soon as possible with the revenue department and their officers are deployed as the Nodal Officers at the grassroots level.

He made it clear that these officers of the Tehsildar level would only deal with the cases regarding the properties owned by NRIs.Adding more, the minister said that in order to honour the NRIs carving out a niche for themselves in various spheres thus earning laurels for the country, the ‘Achiever Awards’ would be started for which the department has been directed to work out the modalities.

The awards would be given w.e.f. the next year. The minister called upon the officers to work with all the more enthusiasm so as to ensure the success of the ‘Connect With Your Roots’ initiative launched by the Chief Minister to help connect the NRI Punjabi youth with their roots back home. The youth should be invited to visit Punjab and tour programmes be organized for them.

Rana Sodhi also directed the departmental officers to compile a report of the various cases related to the NRIs lying pending in different wings and furthermore, the record with regard to the solved as well as the unsolved cases be submitted to him. He also emphasized that detailed record of the students going abroad for studies be maintained by the department apart from the maintenance of record related to the youth facing problems abroad who had gone to the foreign shores in search of jobs.

This would come in handy for the Punjab Govt to render them all possible help in the hour of need in collaboration with the Union External Affairs Ministry. Among other dignitaries present in the meeting included the Special Secretary of the department Mr. M.P. Arora, ADGP, NRI Wing, Punjab Police Mr. Ishwar Singh, Secretary Punjab State Commission for NRIs Mrs. Amaninder Kaur Brar and the Deputy Secretary of the department Mrs. Ranju Bala.