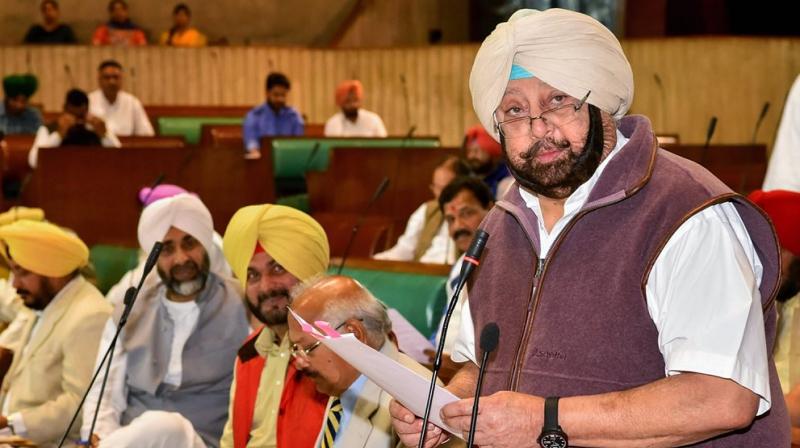 The CM said, that the time of talking peace with Pakistan was far from over now after this dastardly attack, and there should be retaliation against the neighbor harbouring terrorists and blatantly causing carnage in our nation.

He cautioned Pak Army Chief, General Qamar Jawed Bajwa, from causing unrest in India, and warned him not to aim spreading terror in Punjab through various terror outfits. He said that it is not a Punjab of 80s today, and a fully motivated force of 81000 men is standing guard, fully equipped, which has passed the test of fire during the bygone era of terrorism the state witnessed. The force and intelligence of the state have already busted as many as 28 terror modules in the recent months.

He accused Pak of playing a double game, with on one hand, the Pak PM Imran Khan talking of peace, and starting University in the name of Guru Nanak, and on the other hand the ISI, hand in glove with Pakistan army wreaking havoc in our country.

The resolution passed in the Vidhan Sabha read, “The house strongly condemns the barbaric attack by Jaish terrorists on the convoy of the CRPF in Pulwama that left 41 brave personnel dead and many others injured. Most of these personnel were on their way back to join their duties to defend the borders of India after their holidays.  The sacrifice of these martyrs should not go waste and I urge the centre to ensure a befitting response to this attack on our country.

The attack exposes the double standards of the Pakistan government, who on one hand is talking of peace and on the other actively supporting these terror outfits in J& K.  We are all with the families of these martyred soldiers in their hour of grief and extend our heartfelt condolences to them.”

Speaking in the House, Shiromani Akali Dal (SAD) member Bikram Singh Majithia said that the chief minister had spoken like a soldier and a true Indian. Such a big tragedy had never occurred earlier, he said, adding that the House’s request for condemnation of Pakistan and Prime Minister Imran Khan should be placed on record. Dubbing Imran as an ISI puppet, he said the attack had exposed their double standards.

Leader of Opposition Harpal Singh Cheema soughta compensation of Rs 1 crore and jobs for the kin of the four deceased victims from Punjab, to which the Chief Minister later told media persons outside the House that it was a small issue and would be done.

The CM said, that he hoped that this attack and the resultant action would not affect the Kartarpur Corridor plans and that the Sikh Sangat would be able to do ‘Khule Darshan Deedare’ of the gurudwara, visa-free, as planned. He said, he had confidence that the Corridor plan would be well protected, but there is a need of change in Pakistan’s attitude regarding the issue, if it really wants peace between both nations.