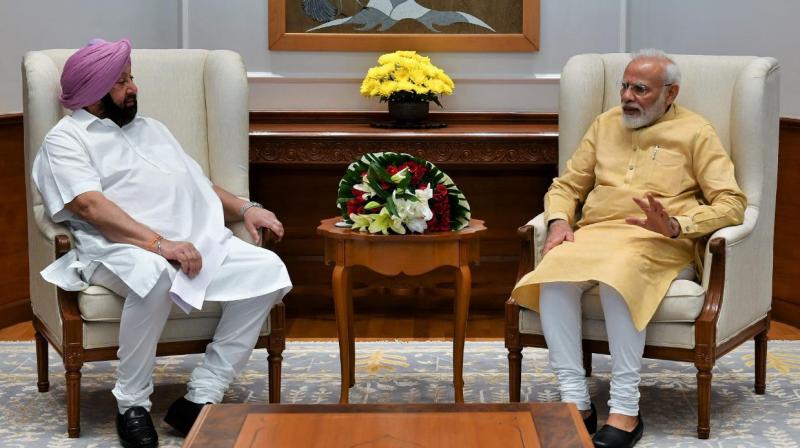 New Delhi :Punjab Chief Minister Captain Amarinder Singh on Thursday urged the Central Government to take up cannalisation of the state’s three eastern rivers of the Indus Water System as a national project, to enable conservation of water and enhancement of the region’s economic growth.

In his proposal presented to Prime Minister Narendra Modi during a meeting here, the Chief Minister suggested construction of high speed economic corridors on 985 km-long river embankments, apart from river training works, flood protection measures and lining of internal side-slopes of the Sutlej, Ravi and Beas.

The move, he said, would help the state enhance its `Jal Shakti’ (Water Power) to encourage diversification of agriculture, promote quality urbanization and colonization, and to speed up industrialization for better and quicker economic emancipation of our citizens.

Complimenting the Prime Minister on his initiative to provide drinking water to each household in the country, through the creation of the new Ministry of Jal Shakti, and the inception of Jal (Water) Jeevan (Life) Mission and the “Nal se Jal” (Tap Water) scheme, Captain Amarinder said his government also stands committed to the cause of providing drinking water to its citizens under the initiative `Har Ghar Pani - Har Ghar Safai’ (Water and Sanitation for Every Household).

The Chief Minister, while expressing concern over the state’s reduction in Jal Shakti at the time of India’s partition and against during the reorganization of the state in 1966, pointed out that the three perennial rivers of Sutlej, Ravi and Beas irrigate only about 27 percent of the state's cultivated area, leading to over-exploitation of the ground water. It is apprehended, he further noted, that seven districts of the state will transform into a desert in the near future, with sure signs of poverty revisiting these areas.

Underlining the need to increase water productivity through augmentation and strengthening of water management, control and regulation infrastructure, Captain Amarinder suggested launch of the cannalisation project with the Sutlej river, which would require an investment of about Rs.4000 crore (US $ 0.7 billion) over a period of 3 to 5 years, exclusive of external incentives such as commercial exploitation of Government and private land and waiver of taxes, duties and cesses, as relevant.

The task may begin with a feasibility study that may be assigned to techno-economic experts of international repute, he suggested.The Chief Minister assured that the state would extend its full cooperation to get the proposal realised in terms of sending a team of officers from the Punjab Government to engage and discuss the same with the officials of the Union Ministry of Jal Shakti.

Captain Amarinder also underlined the need to harness the river water which was currently flowing into Pakistan during the monsoons. Pointing out that the three rivers as of now have kutcha (earthen) embankments, measuring 945.24 kms; (Sutlej 484.12 kms, Ravi 245.28 kms and Beas 215.84 kms), covering almost over 60 percent of State's area, he observed that the 1/3rd of the state’s population living in the riverfront areas was also suffering due to the flooding that occurs during the monsoon period.

The canalization of rivers and development of riverfront areas will expand activities leading to widening of the base of Punjab's economy, diversifying economic activities and sources of livelihood for State's rapidly growing younger generation, he added.