Will give in writing that BJP will win polls with absolute majority: Yeddyurappa 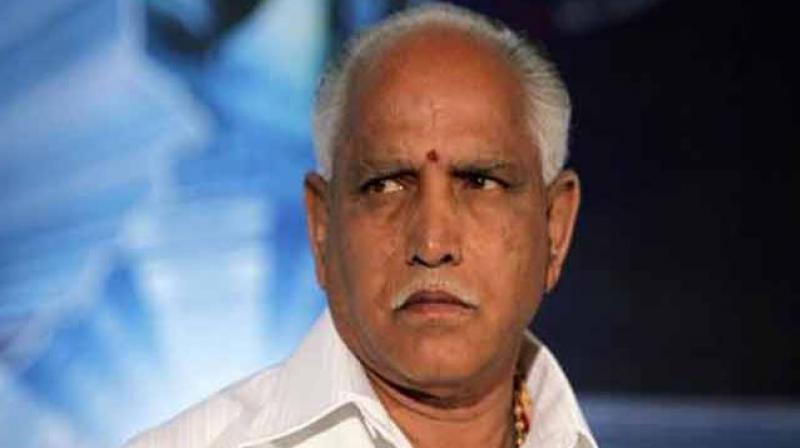 BJP's Chief Ministerial candidate B S Yeddyurappa today said he will "give it in writing that the saffron party would win the Karnataka Assembly elections with an absolute majority and get 125 to 130 seats. He claimed that there is a strong wave in BJP's favor. "I have been in Karnataka politics for long... I will give it in writing. BJP is winning with an absolute majority in the Karnataka elections. You can verify it once the results are out," he told reporters here. Yeddyurappa said his calculations had never gone wrong in his political career and he expected the BJP to win 125 to 130 seats. "We expect to win 125-130 seats. Congress will not cross 70 and JDS not cross 24-25. These are my figures. My calculations have never gone wrong in my political career," he said. Yeddyurappa claimed there was a strong wave in BJP's favor and public ire against Chief Minister Siddaramaiah and the Congress. To a query, Yeddyurappa said there was no possibility of a hung Assembly. "The Congress knows it is going to lose. There is no question of a hung Assembly. I am confident that BJP will form the government," he said. Asked to react on Siddaramaiah's "mentally disturbed" comment about him, Yeddyurappa said the chief minister was saying such things because he knows he would lose both Chamundeshwari and Badami seats from where he is contesting. Siddaramaiah had called Yeddyurappa "mentally disturbed" when asked to respond to BJP's chief ministerial candidate's statement that he would form the government on May 17. Asked about the possible formation of a BJP government in the state, Yeddyurappa said Prime Minister Narendra Modi, BJP President Amit Shah, and other leaders are confident that the party would win with an absolute majority. "He (Prime Minister Narendra Modi) is in touch with me and (BJP president) Amit Shah. Everybody is confident of winning with an absolute majority. We are 100 percent sure of forming the government on May 17," he said.