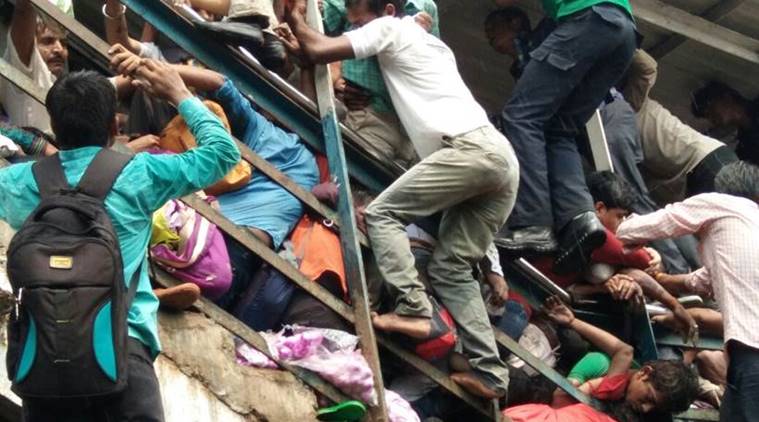 Mumbaiâ€™s Elphinstone foot bridge stampede that claimed the lives of 22 people is a perfect example of the eminent tragedies lurking in every corner of India and the apathy of our system to the safety and comfort of the common Indian citizen. This tragedy could have been avoided easily. The Railway authorities concerned were aware that this bridge can prove fatal for human lives. In fact there were frequent complaints by the concerned citizens to the Railway Ministry but as usual these were passed on from one office to other. Even the great Sachin Tendulkar sometime ago had asked a question in this regard in the Rajya Sabha highlighting his concern about the safety of the people, who use this bridge,

Besides the death of 22 people, scores were injured and traumatized for a while. But the bridge is back in the use as Mumbaties have no other option except to use it to cross to other end.

The concern was for weak structure and narrow width of the bridge as the daily traffic on it was increasing. Surprisingly the structure held its ground but the people trampled one other that caused so many deaths.

This tragedy highlights two critical deficits in the Indian system. First is the misplaced priorities and apathy of Indian politicians and bureaucracy. This bridge was refused funds for expansion and repair for want of funds. But the very same system is prepared to pay 17000 crores annually for a bullet train. This very system has spent crores on constructing monuments and structures which are symbols of their philosophy. Their philosophy is not interested in the well being and growth of the people. The system works to glorify them. They are cushioned from the reality by the government salaries and conveniences. They donâ€™t have to cross such bridges to go to work. They always have VIP access so they remain safe in their bubbles of the â€?New Indiaâ€?

Second deficit is what has allowed first to grow into a monumental monster. That is the ever growing population of the country. Indians are breeding like mosquitoes and have allowed themselves to become a vote bank to be bought, used and discarded. We continue to bring millions of children into this tiny little country where the value of life is almost zero and very little opportunity to live life to their potential.

Almost daily we see a tragedy that makes our souls cringe. Our massive population goes through ordeals that challenge the basic concept of humanity. We see people carrying their dead on shoulder for miles to give them decent burial. We see female fetus discarded in garbage. We see people being forced to clean sewerage without any protection and choking to death. And we see some bureaucrats and politicians flying over to inspect the tragedy and expressing their regret on twitter.

We, the people of India, have allowed such tragedies happen to us again and again. There is no spirit of India or Mumbai that makes them resilient. Itâ€™s the need of the people that keeps them going. The need to earn is the basic livelihood. The change can be brought by us, the citizens of India. Make every vote count and make every politician earn their Vote.