AAP MLAs bat for farmers, hold protest outside Assembly in support of their demands 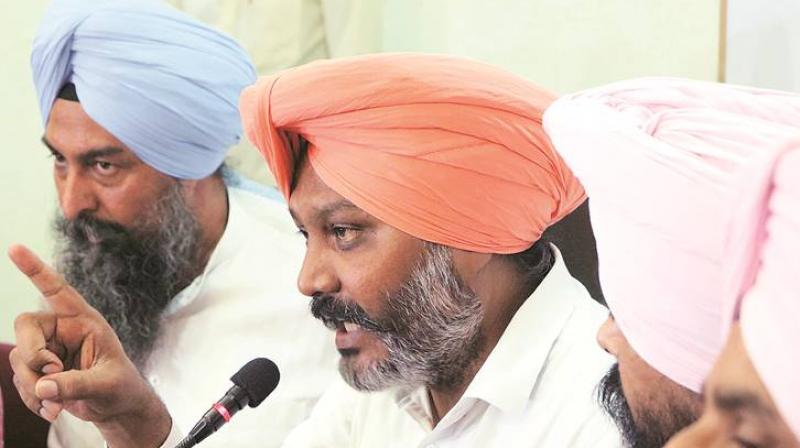 Chandigarh : On the 5th day of the ongoing Budget Session of Punjab Vidhan Sabha, Aam Aadmi Party (AAP) MLAs, led by Leader of Opposition Harpal Singh Cheema and state Kisan Wing president and party’s Kotkapura legislator, Kultar Singh Sandhwan, on Thursday, protested outside the assembly in support of the demands of the farmers and farm hands in the state.
On the occasion, the AAP MLAs made a mockery of the government by covering their faces with masks. Taking a swipe at Chief Minister Capt. Amarinder Singh’s statement made by him after the Governor's speech, on Wednesday, saying that the promised smart phones could not be given to students in view of the spread of Corona virus in China, which the AAP leader said was a mere face-saving exercise.
Giving his reaction to newsmen during the protests, Harpal Singh Cheema, Aman Arora and Kultar Singh Sandhwan took pot shot on the dismal performance of the Punjab government, saying that it was not China which was afflicted with the deadly virus it was the Captain government which had been the victim of corona virus, which was why it had failed to fulfill the election promises it pedaled before assuming power in 2017 even as three years had rolled by. The AAP leaders alleged that by reneging on poll promises, the government in the saddle had disappointed not only the farmers and farm hands, but also every section of society, who were passing through financial hardships.
The LoP said that the ruling Congress government grabbed power in 2017 by pedaling false promises about a complete loan waiver, saying that it was now running away from the promises made to the farmers and farm labour. He said that while backtracking on the promises, the government indulged in false propaganda by splurging worth crores of rupees on the hype on loan waiver.
The AAP leaders raised the issues of complete loan waiver to the peasants and farm laborers, check the menace of stray cattle to protect their crops, the implementation of Swaminathan reports in Punjab on the line of Kejriwal-led government in Delhi, ensuring of minimum support price (MSPs) by union government for farmers crops and abolition of the existing marketing structure in the state.
Others who were present on the occasion included Principal Budh Ram, Prof. Baljinder Kaur, Sarabjit Kaur Manuke, Rupinder Kaur Ruby, Meet Hayer, Jai Krishan Singh Rouri, Manjit Singh Bilaspur and Master Baldev Singh (All MLAs), party spokesman Govinder Mittal and State Media Head Manjit Singh Sidhu.