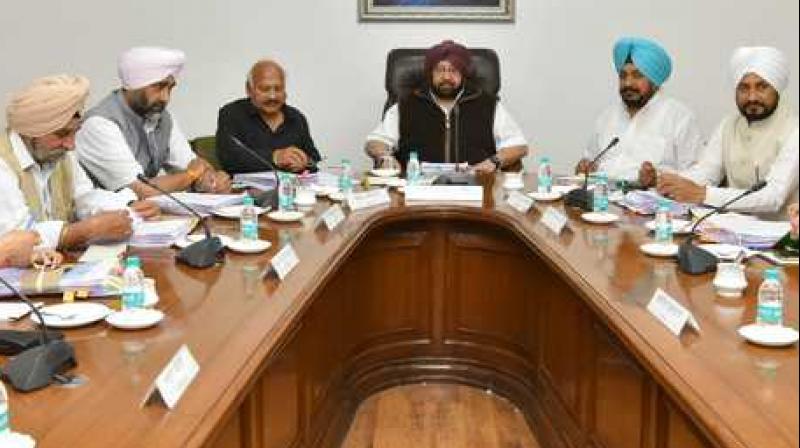 Chandigarh: In a major initiative to check the depletion of ground water in the state, the Council of Ministers on Wednesday approved the creation of the Punjab Water Regulation and Development Authority, which will be empowered to issue directions on water extraction but will not be authorised to impose any restrictions or tariff on extraction of water for drinking, domestic and agriculture purposes.

The Cabinet, under the chairmanship of Chief Minister Captain Amarinder Singh, decided to promulgate an ordinance called the Punjab Water Resources (Management and Regulation) Ordinance, 2019. The proposed legislation is aimed at development, management and regulation of water resources of the State for ensuring their judicious, equitable and sustainable utilization and management, an official spokesperson said after the cabinet meeting.

The Authority would be empowered to issue general directions related to extraction and use of ground water, besides ensuring optimal and efficient utilization of all water resources in the State, including canal irrigation. It will also issue guidelines on recycling and reuse of water and its conservation.

Importantly, the legislation does not allow any restriction to be imposed on extraction of ground water for drinking or domestic purposes. For drinking, domestic and agriculture purposes, the Authority would be guided by the policy of the State Government. It would , however, be required to issue tariff orders for use of water for industrial and commercial use.

Further, the Authority would have the right to impose financial penalties upon non-compliance of its orders or directions. It has been vested with the powers of a Civil Court, and would also be required to present an annual report which would be laid on the floor of the House by the Government, disclosed the spokesperson.

Underlining the need for ensuring the long-term sustainability of the finite resource of water, for meeting the needs of the present and future generations, the Chief Minister said it was imperative to find ways and means of management and conservation of the water resources of the State in the most economical and efficient manner, through a legal framework suitable to address the challenge.

It may be noted that the Punjab Government has already signed an agreement with Israel’s National Water Agency, Mekorot, to help the State prepare a comprehensive plan for more efficient and sustainable use of the State’s water resources.The proposed Authority will comprise a Chairperson, who would be a person with ability and demonstrable experience in the field of water and its management with a sound understanding of public administration, law and economics.

In addition, it will have two members who would be experts drawn from Water Resources or connected areas of Finance, Law, Agriculture and Economics. An Advisory Committee of five experts would provide assistance, as required, to the Authority in its work, said the spokesperson.The Government shall constitute a Selection Committee headed by Chief Secretary and consisting of at least two other members, to recommend the names of the Chairperson and members.

The Chairperson or other Members shall hold office for a term, as may be specified, but not exceeding five years at a time, from the date on which he enters upon his office, provided that no person shall serve as Chairperson or other Member for more than two terms.As per the draft legislation, the Government may also appoint a serving or retired officer who has worked on a post equivalent to the rank of Special Secretary to the Government of Punjab or higher, as Secretary of the Authority, with tenure of three years and extendable by another two.

The legislation also provides for a State Council for Water Management & Development, headed by the Chief Minister and comprising Water Resources Minister, Local Government Minister, Water Supply & Sanitation Minister, Rural Development Minister, Finance Minister, Industry Minister and Power Minister. The Council would be tasked to approve the State Water Plan, which would be based on integrated Water Plans to be prepared for every block.

The Council would also approve the State Water Policy and all other policies related to use and re-use of water in the State. The proposed regulatory Authority would be responsible for implementation of the State Water Plan, according to the spokesperson.

There shall be an Advisory Committee on Water Resources headed by the Chairperson of the Authority to be notified by the Government, consisting of up to five experts having knowledge and experience in the fields of Hydrogeology, Environment, Water Resources, Agriculture, Management or Economics and up to ten ex-officio members from various Government Departments, and the Authority shall consult the Committee on major questions of policy and regulatory directions proposed to be issued to the general public or to a class of water users.

Water Resources Minister Sukhbinder Singh Sarkaria, whose department has been responsible for piloting the Ordinance, said the proposed regulatory architecture had been carefully crafted through multiple iterations. It has been structured to provide functional autonomy to the regulator on the one hand, while retaining the overarching role of the State Government in laying the broad policy to guide the regulator, on the other.

He said the Congress Government in Punjab was firmly committed to preserving the scarce and fast depleting water resources, and to taking urgent steps to improve efficiency in the use and reuse of water, in the State.