A row erupted in Tripura Tuesday when Chief Minister Manik Sarkar, who heads a Left Front government in the state, alleged that Doordarshan and All India Radio (AIR) refused to broadcast his Independence Day address unless he “reshaped” it. 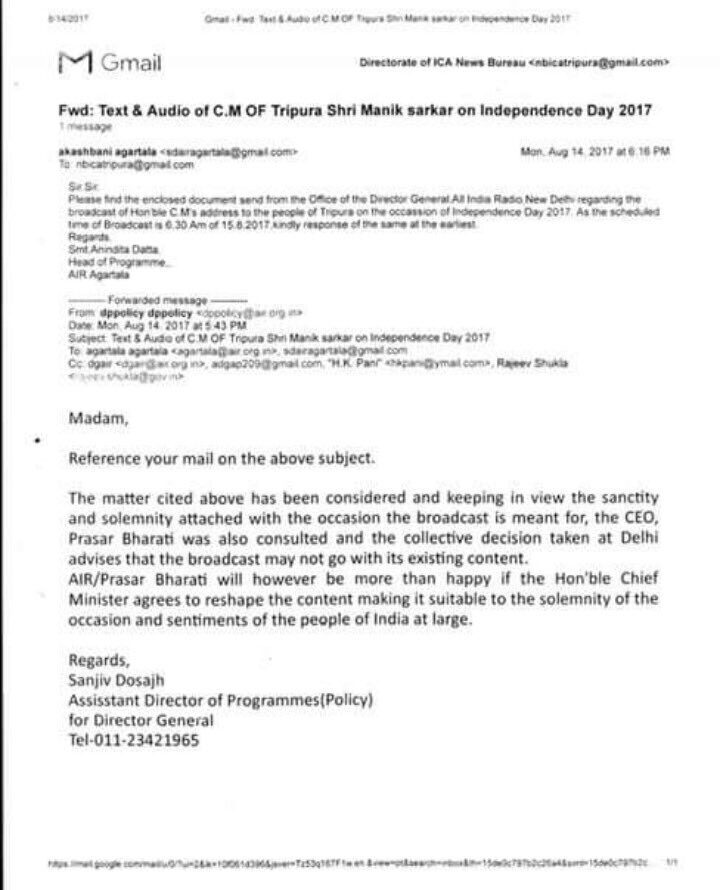 A row erupted in Tripura Tuesday when Chief Minister Manik Sarkar, who heads a Left Front government in the state, alleged that Doordarshan and All India Radio (AIR) refused to broadcast his Independence Day address unless he “reshaped” it.

A PTI report from Agartala quoted a statement from the Chief Minister’s Office: “The Chief Minister clearly stated that he would not change a single word and described it as unprecedented, undemocratic, autocratic and intolerant step.”

There was no immediate reaction from Prasar Bharati which runs Doordarshan and All India Radio.

The government statement alleged that Doordarshan and AIR had recorded Sarkar’s speech on August 12. At 7 pm Monday, the Chief Minister’s Office was informed via a letter that his speech would not be broadcast unless he “reshaped it”.

The letter purportedly said, “The message of the Chief Minister was closely examined by competent authority. In view of the sanctity of the occasion, the broadcast code and responsibility of the public broadcaster it is not possible to telecast it in the present format.”

“However, Doordarshan/Prasar Bharati will be happy if the Chief Minister agrees to reshape the content making it suitable to the solemnity of the occasion and sentiment of the people,” it said.

In New Delhi, the CPI-M politburo, in a statement, said it “strongly condemns the refusal by Doordarshan and All India Radio to broadcast the customary Independence Day address of Manik Sarkar”.

“Doordarshan and All India Radio had recorded his speech for the occasion. However, they subsequently informed him that the speech cannot be carried as it is and asked him to ‘reshape’ it,” it said.

Demanding action against those responsible for “prohibiting” the broadcast, the politburo said: “The Modi government should stop treating Prasar Bharati as a department of the Ministry of Information and Broadcasting.”

“This is a gross infringement on the right of a Chief Minister to address the people of his state on Independence Day. This act is reminiscent of the Emergency days and goes beyond as it seeks to gag the elected Chief Minister of a state. The central government is trampling upon the autonomy of Doordarshan/AIR and Prasar Bharati by such acts of censorship,” the statement said.

CPI-M general secretary Sitaram Yechury tweeted “Doordarshan is not the private property of the BJP or the RSS. Its refusal to broadcast Tripura CM’s speech is undemocratic and illegal.”