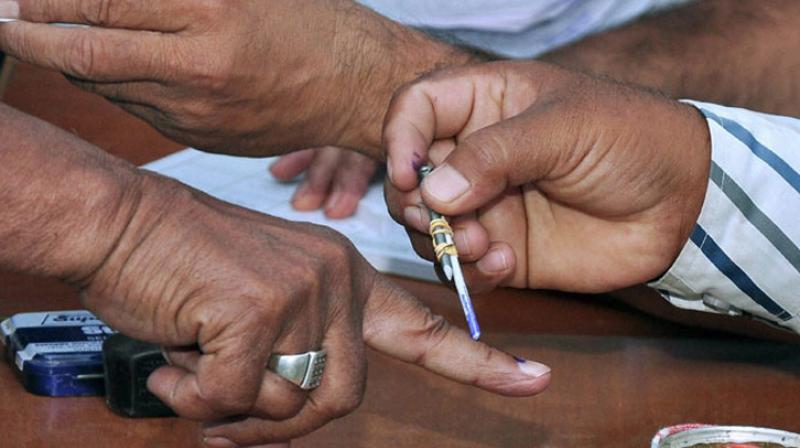 About 11 percent polling was today recorded in the first two hours of voting in Karnataka. which is witnessing a three-cornered contest among the ruling Congress, the BJP and former Prime Minister H D Deve Gowda's JD(S). Election authorities said "moderate to brisk" voting has been witnessed in 222 out of 224 seats where polling began at 7 am. People were seen standing in queues to cast their votes in the early hours itself, factoring in that the temperature may go up later in the day. Also, it has been raining in different parts of south interior Karnataka for the last couple of days during the evening hours. Senior citizens were seen in good numbers standing in queues at various polling stations to cast their votes early. State BJP chief and party's chief ministerial candidate B S Yeddyurappa, and Pradesh Congress Committee G Parameshwara were among the first to cast votes in Shikaripura in Shivamogga and Yaggere in Tumakuru respectively. Former Prime Minister H D Deve Gowda along with wife Chennamma cast their votes at Paduvalahippe in Hassan district. Film actors Ramesh Arvind, Ravichandran, also a scion of Mysuru royal family Yaduveer Krishnadatta Chamaraja Wadiyar were among the prominent personalities to cast their votes early today. There are reports about the delay in polling due to some technical issues with the electronic voting machines (EVMs) from different parts of the state. The election for the Jayanagara seat in Bengaluru has been countermanded following the death of BJP candidate and sitting MLA B N Vijaykumar. The Election Commission has also deferred the polls for Rajarajeswari Nagar constituency to May 28 after a massive row erupted over a large number of voter ID cards being found in an apartment. Suspecting something fishy, both Congress and BJP have pointed accusing fingers at each other in the matter. "Today people of Karnataka are standing in queues to create history & show the nation the way to liberal, progressive, peaceful & compassionate politics & governance. I thank them for their support & wish them well," Chief Minister Siddaramaiah tweeted. Over 2,600 candidates are in the fray-- more than 2400 men and over 200 women. The total voters including service electors according to the 2018 final rolls are 5,06,90,538, of whom 2,56,75,579 male voters, 2,50,09,904 female and 5,055 transgender voters. Officials said 58,008 polling stations have been set up across the state, of which 12002 have been designated as "critical", with over 3,50,000 polling personnel on duty. Police have made elaborate security arrangements for the smooth conduct of polls that will go on until 6 pm. "82,157 people have been deployed for poll duty that includes DSPs, home guards and civil defense, and forest guards and watchers," Karnataka DGP Neelamani N Raju said. This also includes about 7,500 personnel from states like Andhra Pradesh, Telangana, Maharashtra, Chattisgarh, Kerala, and Goa, she said, adding, central forces have been deployed. One among the interesting aspects of this election is that four candidates who have served as Chief Minister of Karnataka are in the fray-- Chief Minister Siddaramaiah (Chamundeshwari and Badami), BS Yeddyurappa (Shikaripura), H D Kumaraswamy (Chennapatna and Ramanagara) and Jagadish Shettar (Hubli-Dharwad Central.