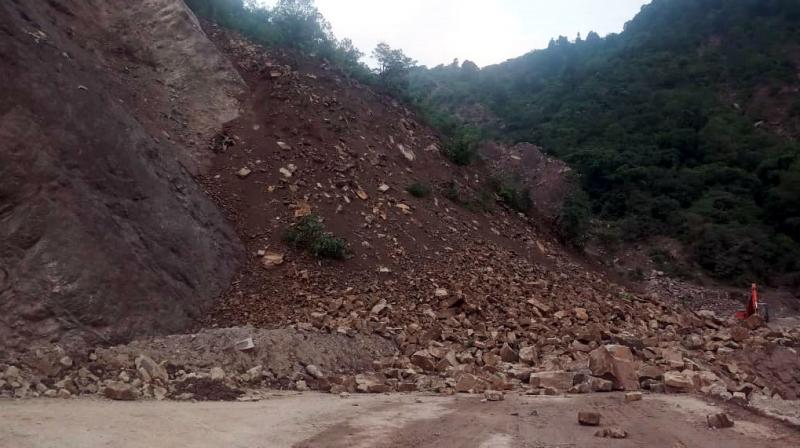 Banihal/Jammu, Feb 12: Fresh landslides struck several places along the Jammu-Srinagar National Highway which remained closed for the seventh consecutive day Tuesday. Authorities are hopeful of clearing the debris and making the road traffic-worthy by this afternoon. The road clearance operation is going on in full swing.

The massive landslide at Maroog was cleared but fresh landslides occurred at several places between Ramsu and Panthiyal overnight and it might take another five to six hours to clear the highway provided there are no more landslides, Deputy Superintendent of Police (Traffic, National Highway, Ramban), Suresh Sharma told PTI.

Barring this problematic 12-km stretch from Ramsu to Panthiyal, he said the road is almost through and nearly two dozen oil tankers and trucks carrying LPG cylinders, which were stranded near Maroog, proceeded towards Srinagar after the clearance of the landslide Tuesday morning.

The highway was closed for traffic on Wednesday following heavy snowfall and incessant rains which triggered avalanches and landslides at various places especially on Qazigund-Banihal-Ramban stretch including Jawahar Tunnel - the gateway to Kashmir Valley. Sharma said several landslides occurred overnight at Anokhi fall, Kella morh and Panthiyal and men and machinery are on the job to remove the debris.

Once the operation is complete, the Kashmir-bound stranded vehicles will be allowed to move towards their destination, he said adding the decision to allow fresh traffic on the highway will be taken later in the day after reviewing the situation.  Officials said the eastern tube of Jawahar Tunnel, north portal side, which was blocked by a snow avalanche on Thursday, was made traffic worthy on Monday evening.

In view of the closure of the highway, the Indian Air Force (IAF) had so far airlifted over 1400 stranded passengers including students since Friday. The weatherman has predicted another spell of snowfall and rains across the state from Tuesday evening. A fresh western disturbance is likely to affect the state from Tuesday evening to Friday noon. The system will move from north west to south east and again the Pirpanjal range from Gulmarg to Bhaderwah will have moderate to heavy rain or snow especially on February 13 and 14, a spokesman of the MET department said.