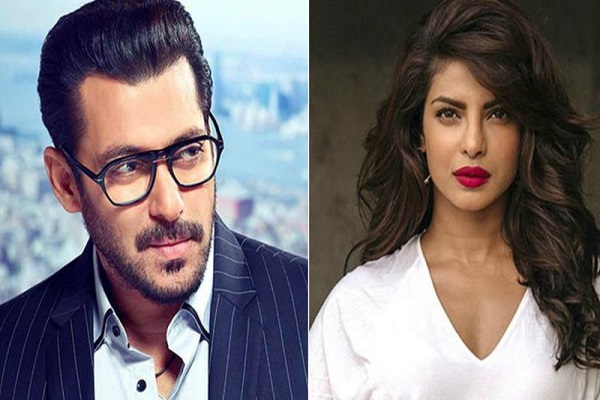 Mumbai: After a gap of over two years, actor Priyanka Chopra is all set to come back to the Indian film industry with Salman Khan's "Bharat".

The 35-year-old actor, who moved to New York for the TV series "Quantico" and made her Hollywood debut with "Baywatch", will star opposite Salman in the Ali Abbas Zafar-directed film.

After much speculation over the leading lady, the makers of "Bharat" have signed on Priyanka. According to reports, Katrina Kaif was being considered for this film.

The actor, whose last Bollywood outing was "Jai Gangaajal" in 2016, said she was excited to reunite with Salman and director Ali.

"I'm looking forward to begin shooting this film and working with Salman and Ali again after a considerable time. I've learnt a lot from them in our previous collaborations and am excited to see what this one has to offer.

"I'm also looking forward to working with Alvira and Atul and the entire team of 'Bharat'.To all my well-wishers who've been so patient and supportive Thank you for your constant support," Priyanka said in a statement here.

The actor duo will be teaming up after 10 years, after having worked in films such as "Mujhse Shaadi Karogi", "Salaam-E-Ishq" and "God Tussi Great Ho". Ali, who has directed Priyanka in "Gunday", said the actor was the perfect choice for the female lead in the film.

"'Bharat' is Priyanka's homecoming to Bollywood after having proven her range as a performer in Hollywood films and a blockbuster global TV show.

"Priyanka is the biggest Indian artiste internationally and she is a perfect fit for the film. Priyanka brings in outstanding acting as well as incredible international appeal to make the scale of the film bigger and even more global," he said.

Ali added the love story in "Bharat" is very mature and quite subtle, and Priyanka's character is "the catalyst at the film's most important turning point". "We needed an actor who could portray this in the best possible way.

"Her character is the soul of the film, and throughout, she stands shoulder to shoulder with Salman in the journey," he added.

Ali and producer Atul Agnihotri travelled to New York to meet Priyanka and gave her the narration of the film. Priyanka loved Ali's script and she was immediately convinced to do the film.

Atul, who is collaborating with Priyanka for the first time, is happy to have her on board.  The film is an official adaptation of 2014 Korean film, "Ode to My Father" .

Talking about the film, Ali said, "'Bharat' is rooted in India and its culture despite it spanning over 70 years and set across various countries of the world."

"Bharat" has started its prep in London, after which the director will move to Spain, Poland, Portugal, and Malta.

The film will see Salman sport five different looks spanning 60 years, wherein a crucial part will showcase the actor in his late 20s, looking much leaner and younger. He will be recreating his "Karan Arjun" look.