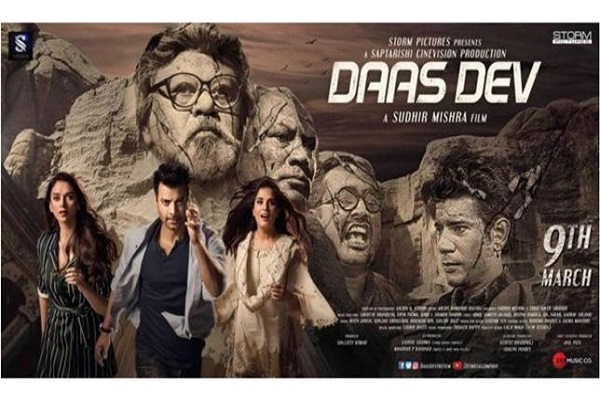 Mumbai: The release of "Daas Dev" has been pushed by a week and the Sudhir Mishra-directed film will now arrive in theatres on April 27.

It was earlier slated to release on April 20. The news of the date shuffle was announced on the film's Twitter page.

A statement by banner, Saptarishi Cinevision Production, read that the team "voluntarily pushed/extended" the release date of the film to April 27 to avoid clash with films opening this week.

"With around four Bollywood films and few regional films releasing on April 20, the makers felt that they required a cleaner window to reach out to the audience. Keeping this in mind producers and the distribution team took a strategic call to push the film's release by a week," the statement read. "I trust my release partners-presenter and distributor. I believe they are doing a fabulous job backend. We have a clutter free date now and every producer makes a film with this anticipation of a dream run, so have I," producer Sanjeev Kumar said in the release.

Set against the backdrop of Uttar Pradesh, "Daas Dev" is a film about power, love and addiction. It will explore the reverse journey of Devdas - from a servant (das) to a god (dev).

This film has been presented by Storm Pictures and distributed by Shringar film.  PTI