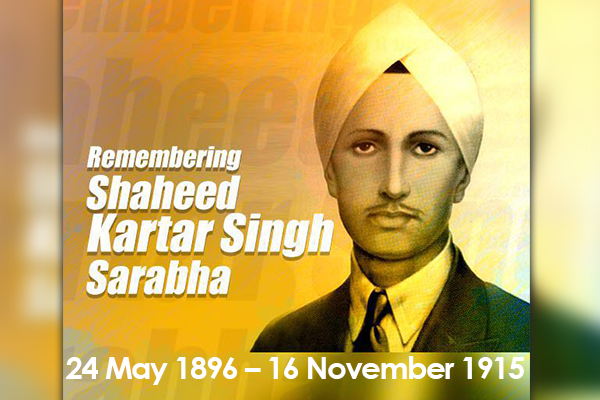 Kartar Singh Sarabha Grewal was born on 24 May 1896 in Ludhiana, Punjab India into a Sikh family in village Sarabha, district Ludhiana, Punjab.was an Indian Sikh revolutionary who is among the most famous and reputed martyrs of Punjab. He was only 17 years old when he became a member of Ghadar Party, then came up as a leading luminary member and started a fight for an independent India. He was one the most active persons in the movement. Singh was executed at Lahore in November 1915 for his role in the movement in February 1915 when he was only 19 years old. When the Ghadr party was founded in mid-1913 with Sohan Singh, a Sikh peasant from Bhakna village in Amritsar district, as president and Hardyal as secretary, Kartar Singh stopped his university work, moved in with Har Dyal and became his helpmate in running the revolutionary newspaper Ghadr (revolt). He undertook the responsibility for printing of the Gurmukhi edition of the paper. He composed patriotic poetry for it and wrote articles. With the start of World War I in 1914, the British became thoroughly engrossed in the war effort. Thinking it to be a good opportunity, the leaders of the Ghadar Party published the "Decision of Declaration of War" against the British in the issue of 'The Ghadar' dated 5 August 1914.

Thousands of copies of the paper were distributed among army cantonments, villages and cities. Kartar Singh reached Calcutta via Colombo on board SS Salamin in November 1914: he accompanied two other Gadhar leaders, Satyen Sen and Vishnu Ganesh Pingle, along with a large number of Gadhar freedom fighters. With a letter of introduction from Jatin Mukherjee, the Jugantar leader, Kartar Singh and Pingle met Rash Behari Bose at Benares to inform him that twenty thousand more Gadhar members were expected very soon. A large number of leaders of the Ghadar Party were arrested by the Government at the ports. In spite of these arrests, a meeting was held by members of the Ghadar Party at Ladhouwal near Ludhiana in which it was decided to commit robberies in the houses of the rich to meet requirements of finance for armed action. Two Ghadris, Waryam Singh and Bhai Ram Rakha were killed in a bomb blast in one such raid. After the arrival of Rash Behari Bose at Amritsar on 25 January 1915, it was decided at a meeting on 12 February that the uprising should be started on 21 February. It was planned that after capturing the cantonments of Mian Mir and Ferozepur, mutiny was to be engineered near Ambala and Delhi.

The trial of arrested leaders in the Lahore conspiracy cases of 1915-1916 highlighted the role of Kartar Singh Sarabha in the movement. His defence was just one eloquent statement of his revolutionary creed. He was sentenced to death on 13 September 1915. A statue of Kartar Singh, erected n the city of Ludhiana commemorates his legendary heroism. He soon became the symbol of martyrdom and many were influenced by his bravery and sacrifice. Bhagat Singh, another great revolutionary of Indian freedom, regarded Kartar Singh as his guru, friend and brother. A statue of him was erected in Ludhiana, and Punjabi novelist Nanak Singh wrote a novel called Ikk Mian Do Talwaran based on his life. The judges during his trial were impressed by his intellectual skills, but nevertheless, he was sentenced to death by hanging. The court observed that Kartar Singh was the most dangerous of all the rebels. "He is very proud of the crimes committed by him. He does not deserve mercy and should be sentenced to death". Kartar Singh was hanged in the Central Jail of Lahore on 16 November 1915.