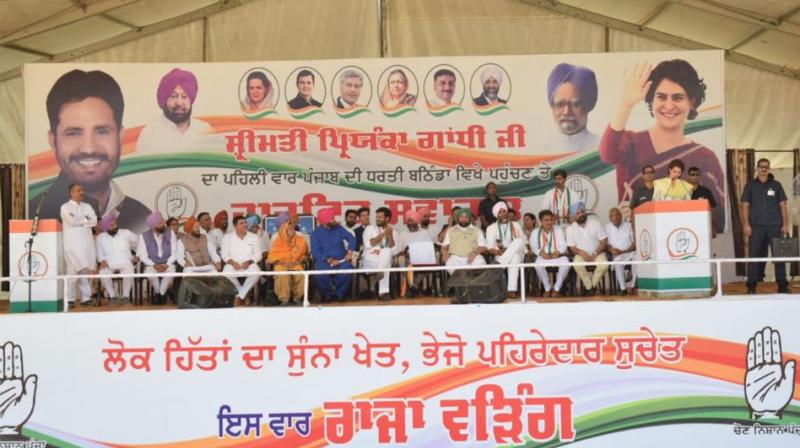 Bathinda, May 14: AICC general secretary Priyanka Gandhi Vadra on Tuesday launched a scathing attack on the Narendra Modi government at the Centre, and their allies the Shiromani Akali Dal (SAD) in Punjab, with a clarion call to the people to give a crushing defeat to these parties in the Lok Sabha polls, in the interest of the future of their state, their nation and their children.

Addressing her first public rally in Bathinda, in support of Congress candidate Amrinder Singh Raja Warring, Priyanka asked the people to teach a befitting lesson to both, the BJP and the SAD, for the victimisation and harassment meted out to them. While taking on Modi for brazenly lying and cheat to the people to further his political interests, Priyanka cornered the Akalis on the issues of sacrilege and the mafia rule that prevailed during their regime.

Priyanka was accompanied by Chief Minister Captain Amarinder Singh, who appealed to the people to strengthen the Congress hands with their vote in this battle for the future of India and to teach arrogant Harsimrat, the SAD candidate from Bathinda, a lesson for the Akali misdeeds. Pointing to the poor public response to Modi’s rally at the same ground in Bathinda yesterday, Priyanka lauded the people for giving a befitting reply to the prime minister’s saga of false promises. 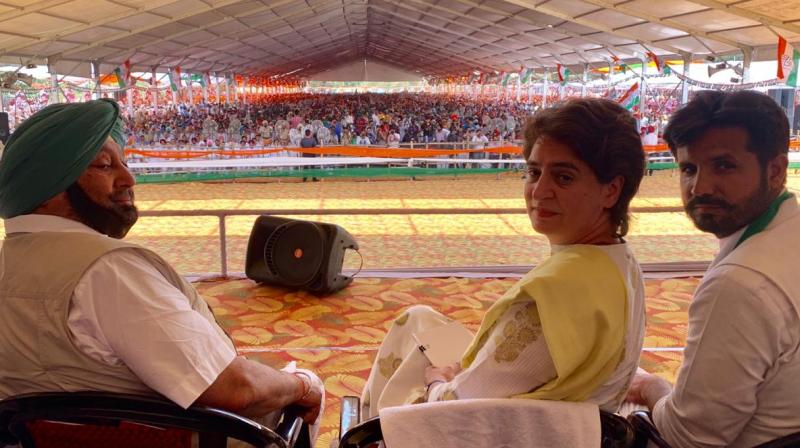 Taking a dig at Modi’s `radars in clouds’ remark, she said the prime minister’s truth had come on the people’s radar, and it was time for him to put his own radar on his unfulfilled promises. Reaching out to the massive crowd, which was more than double of the one witnessed at Modi’s rally yesterday, the Congress leader said that as the wife of a Punjabi, she felt at home in Punjab and among its people. Priyanka appreciated the valour of Punjabis and their ability to remain happy in all circumstances

Lambasting the Akalis, allies of Modi’s BJP, for suppressing and victimising the people of Punjab and destroying generations, Priyanka said they had handed over the state to the drugs, liquor, sand and transport mafia during their 10-year-rule. If Punjab’s youth were being destroyed by Chitta, it was because of the BJP and the Akalis, said the Congress general secretary, pointing out that when Rahul Gandhi had raised the drugs issue before the Assembly elections, they had ridiculed him, only to be exposed later.

Describing Punjab as the land of the Gurus, Priyanka said those who destroyed Sri Guru Granth Sahib ji were destroying the soul of Punjab – a sin that the Akalis had committed. While Baba Nanak always said `tera tera’, for the BJP and SAD, it had always been a case of `mera mera’, she said, recalling that when Punjab was fighting for India’s freedom, the RSS was prostrating themselves before the British to save their own lives. Pinning Modi’s blatant lies and falsehoods, Priyanka said hearing him, one would think the only development in this country had taken place in the last five years. 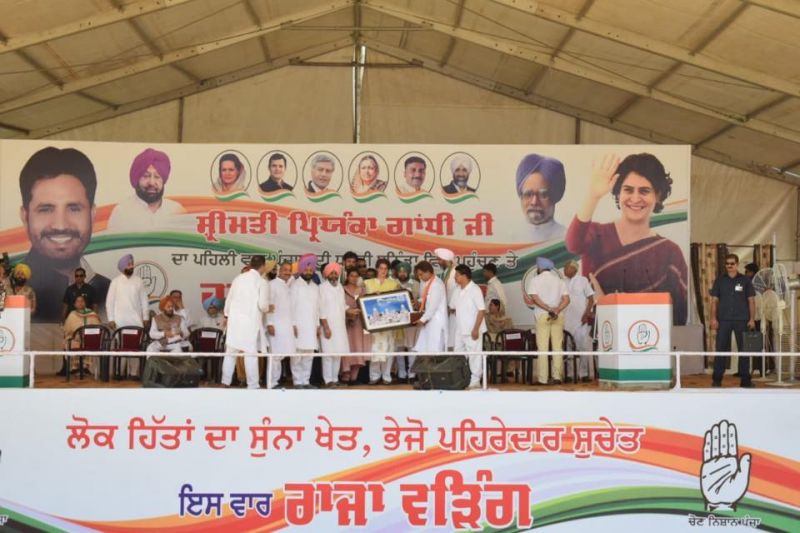 Bathinda, she pointed out, was the biggest example of the industrial and agricultural development that had taken place before the Modi government came to power. Not only was Bathinda a large industrial centre, it was one of the biggest cotton and wheat markets with a well-developed dairy sector and an army cantonment, all of which came up during 70 years before Modi, she added.

Reeling out the long list of Modi’s failed promises, Priyanka pointed out that not a single person had got the promised Rs 15 lakh in his/her bank account, farmers’ income had not doubled, nor had inflation reduced in these years. Far from generating 2 crore jobs a year, the government had cut down jobs by 5 crore, with 24 lakh government posts lying vacant and 50 lakh jobs lost in demonetisation alone, she added.

As many as 12000 aggrieved debt-ridden farmers had committed suicide during the Modi rule and farmers were getting neither proper remuneration for their crops nor requisite seeds and other facilities, Priyanka observed, adding that the prime minister refused to spare even 5 minutes to listen to the woes of the farmers who came from all over the country to Delhi to protest. 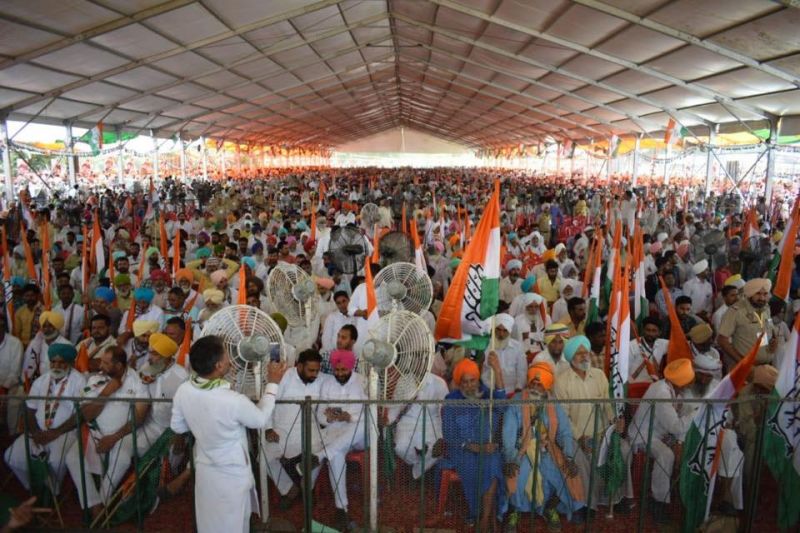 The prime minister had the time to travel half the world, from hugging Obama in US to playing drums in Japan and eating Briyani in Pakistan, but did not have any to meet a single person in his own constituency in these five years, she added. Attacking the Modi government over demonetisation and GST, which had led to people losing money, jobs and businesses, Priyanka pointed out that not a single BJP leader or any rich industrialist had to stand in queues outside the banks during demonetisation.

But when Rahul Gandhi did so, he was ridiculed by the BJP. Unlike Modi and his BJP, Rahul and the Congress do not play the politics of votes but believed only in pursuing the politics of truth, she said, adding that her party wanted not to hide the problems but to root them out. Priyanka urged the people to read the Congress manifesto, which was prepared after one year of research among the people by senior party leaders, on the directions of Rahul.

She listed out the key promises of the party, from NYAY for the poor, to jobs for youth, separate budget and other facilities for farmers, 35% reservation for women in elected bodies and a single slab for GST. Urging the people, whom she described as the biggest strength of a democracy, to think and vote responsibly, Priyanka exhorted them to show to the BJP and SAD that they had seen through these parties and their leaders. “You should ensure that your power remains in your hands and is not destroyed by such forces,” she stressed. 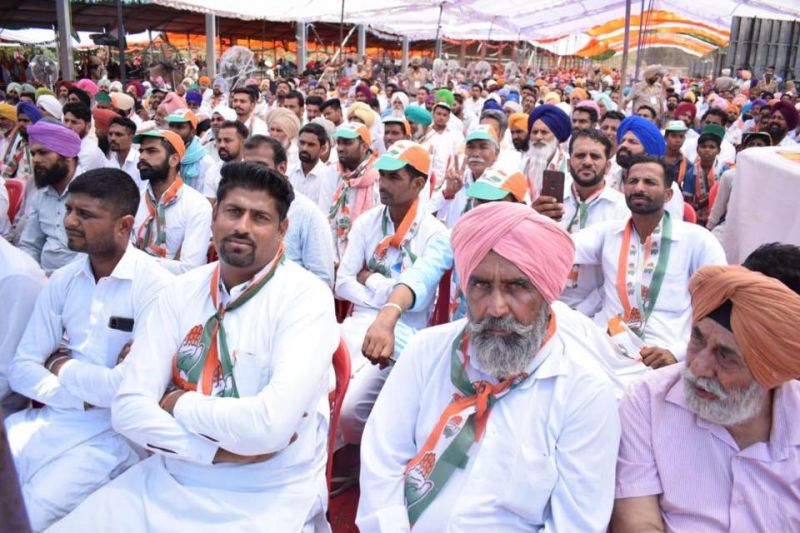 Terming these Lok Sabha polls as a very important election for the nation and its democratic fibre, Priyanka said it was an election to defeat a government which not only did not listen to the people but actually suppressed their voice, and a government that claims to be nationalist while declaring everyone else to be anti-nationals, she added. She appealed to the people to vote for Raja Warring, a progressive and honest candidate, to strengthen his hands in order to install the Congress again at the Centre and strengthen their state, their country and their future. Priyanka was later scheduled to lead a roadshow in Pathankot in support of the party’s Gurdaspur candidate Sunil Jakhar.