Stop Making Fool of Yourself with your Brazen Lies, Says Captain Amarinder Singh 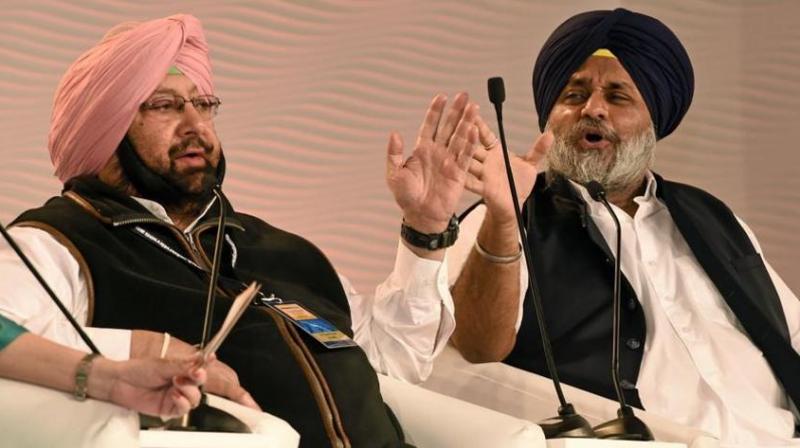 Chandigarh: Asking the Akalis to check their facts before shooting foolishly their mouth on issues of critical interest of Punjab, Chief Minister Captain Amarinder Singh on Monday said the very premise of their criticism of his government’s employment generation programme was based on flawed data.

The Akalis were only making a fool of themselves with their repetitive attempts to mislead the people with half-baked lies that had absolutely no basis and were completely removed from facts, said Captain Amarinder, in a statement issued here.

Even as he once again hurled hard facts and figures to counter the brazen lies of the Shiromani Akali Dal (SAD) on the jobs created by his government in the past three years, the Chief Minister said they had clearly not bothered to understand or analyse the information in the Economic Survey, which they were using as the basis for attacking his government.

The said Economic Survey released by the Union Government clearly stated that the source of data provided on unemployment was the PLFS (Periodic Labour Force Survey) 2017-18 conducted by Labour Bureau, Government of India. The reference period therein was July 2017 to June 2018, which was barely a year since his government had inherited the mess created by the erstwhile SAD-BJP government in the state, Captain Amarinder pointed out.

Given the ridiculously small sample size used, the data about unemployment in Punjab was just indicated, apart from being dated, noted the Chief Minister. It was evident that the Akalis were either too dumb to understand the implications of this data or were deliberately trying to mislead the people of Punjab by giving out selective information, he added.

Captain Amarinder further pointed out that it had been mentioned in the survey itself by the Government of India that no comparison could be made with previous data on unemployment on the basis of this survey “as the data sources are not strictly comparable.”  Clearly, then, there could be no comparison of the data of 2015-16 with the data of 2017-18, he added.

These clear and categorical facts notwithstanding, the Akalis continue to rave and rant about the dismal employment scenario in Punjab, under the incumbent Congress government, like wayward children who were hell-bent on creating trouble for others, mindless of the consequences, said the Chief Minister.

Instead of apologizing for pushing the state into such a terrible mess, with employment at an all-time low under their pathetic anti-people policies during their decade-long rule, the Akalis are trying to spread misinformation to further their petty political interests, Captain Amarinder lashed out.

Apparently the Akalis needed to be told everything many times to make them understand even basic facts, the Chief Minister said, reiterating that under this government’s flagship programme of ‘Ghar Ghar Rozgar and Karobar Mission’, a total of 12.15 lakh jobs had already been provided to the state’s youth. Of these, 57,905  youth had been assisted in government placements, 3.97 lakh in private sector, and 7.61 lakh had been facilitated for taking up various self-employment ventures during last three years.

Apart from this, 20.21 lakh households had been given employment in different MNREGA schemes and 648.26 lakh man days of employment thus generated, from April 17 to December 31, 2019, he added.

Since these numbers were not difficult to understand, the only feasible explanation for SAD’s desperation to undermine his government’s success on this count could be their deep sense of frustration at being completely rejected by the people of Punjab, the Chief Minister quipped.

He reiterated his commitment to continue with his efforts till every eligible youth in the state has a sustainable source of income, either through jobs or self-employment. His government’s focused efforts to bring more and more industry into the state was also aimed at promoting employment generation, in addition to boosting the economy, he added.