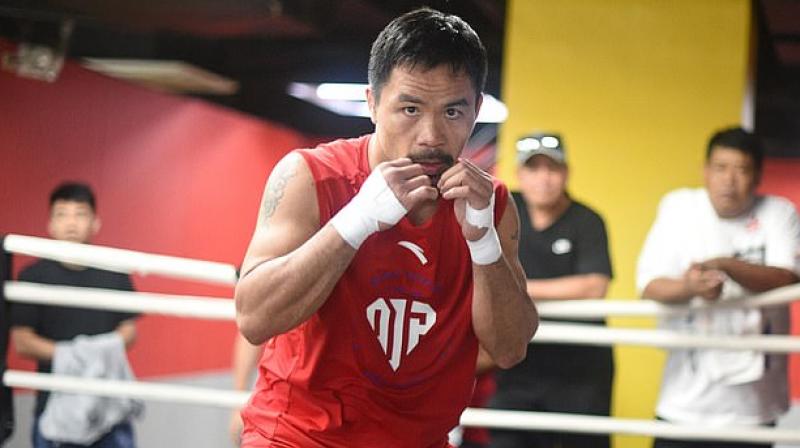 Los Angeles, Jan 10: Manny Pacquiao played down reports linking him to a bid for the presidency of the Philippines, insisting he remained solely focused on the twilight of his boxing career. The 40-year-old boxer, already a member of the Philippines Senate, has been repeatedly linked to a future run for the presidency in his homeland where he remains a national hero.

However, Pacquiao told reporters on Wednesday he had put any future political aspirations on hold as he prepares to defend his World Boxing Association regular welterweight title against Adrien Broner on January 19 in Las Vegas. "A lot of people are saying that I can be the next President," Pacquiao told AFP. "But I'm not thinking about that. I don't have plans right now. Whatever path that God gives to me I will fulfil it."

"Being a public servant is different from sports. It's more on the mind and a lot of problems, thinking about how to solve those problems in the country, and also to provide the solution to those problems." Pacquiao is reuniting with longtime trainer Freddie Roach for his clash with Broner at the MGM Grand Garden Arena, following a two-year rupture in what was once regarded as one of the most tightly knit fighter-trainer relationships in boxing.

Roach, who had worked with Pacquiao for 15 years before they parted ways in 2017, said he is convinced the Filipino is eyeing a future run for the presidency. "I haven't spoken to him to about running for president but he wants to help the people and the best way to help people is to be the boss," Roach told reporters. "He probably wants to be the first President to win a world championship. He's always been a guy who does 100 things at once."

Pacquiao, 60-7 with two draws and 39 knockouts in a career that began in 1995, meanwhile came face to face with old rival Floyd Mayweather while attending an NBA game at the Staples Center on Tuesday. Mayweather scored a victory over Pacquiao in a lucrative 2015 bout before later heading into retirement. Speculation of a possible rematch has continued to rumble despite Mayweather's absence from the ring. For the time being though Pacquiao insists he is not looking past Broner.

"My plan is one at a time," Pacquiao said. "I cannot say about the future until January 19. "After that, we'll have a press conference. Leave it as a question mark for now." However, Pacquiao made it clear he is determined to reclaim his status as a serious force in the division. "I've accomplished what I wanted to accomplish," he said. "But I want to maintain my name at the top and to show that even at 40 years old I can still give the best of Manny Pacquiao, the speed, the power, everything.