This and that of changing atmosphere in the country

This and that of changing atmosphere in the country 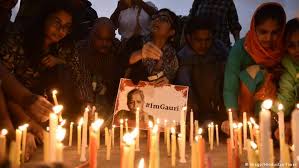 Of late, a change is evident in the atmosphere in our country. There is a sudden disquiet in groups when someone opens their mouth to take up a minority position of dissent.

Healthy discussions or airing oneâ€™s opinions freely seem to have become a habit belonging to the past. In a government bank the other day, as I stood in queue, a sudden row erupted between a cab driver who had apparently been sitting at the bank for hours for two days trying to transfer money for his daughtersâ€™ fees.

Finally, frustrated beyond his ability to hold it in, he began a quarrel with the man at the counter, who tried to placate the irate man. Nothing is my hands, he said; these are the new government requirements. The customer let out a tirade against the man at the helm of the present government, listing colorfully his complaints against, and his opinions of the man.

There was an unnatural hush around him. Surprisingly unnatural, for since when have the very opinionated crowds in India begun to stop themselves from volubly expressing themselves?

One young man attempted to calm the agitated taxi-driver, and half-jokingly said, â€?Arrebhaiya, these days it is best not to open your mouth in public too much. Save your opinions for 2019.â€?

There was some nervous tittering at the comment, but the underlying tension is something that is becoming far too real everywhere, be it on public forums or private gatherings. People are beginning to watch their words a bit too carefully.

The deaths of Gauri Lankesh, M M Kalburgi, Govind Pansare, Ranjan Rajdeo, Narendra Dabholkar, Jagendra Singh and many more is perhaps being taken as warning, and a stark reminder of how liberal voices in the country are being shut down. Not, as in the Emergency era, which we view as the darkest period for democracy, by imprisonment, but by a gun wielding mafia that just shoots those that voice their discontent with them.

A much more fearful prospect than anything India had ever faced before in its years of independent rule. And we are witnessing the trickling down of this fear in many ways. The rational voices are learning to keep quiet, while the Hindutva and rightist ones are getting louder and more vocal.

A sad example was the farewell post of the satirical humans of â€?Hindutvaâ€™ that had a 90,000 following on Facebook for its humorous take on the right-wingers of India.

The site is calling it quits in the aftermath of the Gauri shooting. In its typical style, the post candidly states, â€?It was a good run but ultimately I realised that you guys are not worth a bullet in my f*****g head.â€? Another free voice shut down.

At a time when it is increasingly not enough to be merely be an Indian, we are constantly being are asked at every step to prove our dedication by the self-appointed guardians of the nation who seem to be popping out of nooks and corners.

What â€?being Indianâ€? has become is an evolving concept, and one that seems to require nodding oneâ€™s head in compliance to any and all guidelines that are being thrown at us.

In a movie hall the other day, ahead of us, an elderly lady got up with a bit of difficulty for the national anthem, another recent tool for measuring how â€?Indianâ€™ we are. Perhaps arthritis, or a knee problem had her a bit unsteady, for she leaned on the armrest for support.

The screen of her phone, which she had been holding in her hand, lit up and she glanced down at it. This grossly unpatriotic act caught the eye of a youngish man in the row behind her, and he began a quarrel with her, denouncing her loyalty to â€?hisâ€? country, completely unaware of the fact that â€?ourâ€? culture dictates a modicum of respect for elders the age of our grandparents.

While the old lady was fully capable of holding her own in discussion with the young man, the incident merely underlined the fact that more and more people are more openly able to show their aggression, given that the garb of jingoism has suddenly become an extremely acceptable one to wear.

In the words of Aldous Huxley, â€?One of the greatest attractions of patriotism- it fulfills our worst wishes. In the person of our nation, we are able, vicariously, to bully and cheat. Bully and cheat, whatâ€™s more, with a feeling that we are profoundly virtuous.â€?

This is what we see today all around us. Patriotism is becoming dangerously close to nationalism, where there is a rigid line to tow, a very clear demarcation of the right and acceptable path. Opinions are valid as long as they follow the main narrative in the country today. A difference of opinion by itself seems to be becoming a matter of sedition.

Voicing it seems foolhardy. This nationalistic flavour is not only seen in India, but across the globe, and it is surprising how many seem to have forgotten the results of extreme nationalism in the past. The lessons of history, if so easily disregarded, might just have to be repeated to teach us again that this division we seek on the basis of nations and castes and colour and cultures and language is only that: division of humanity.

Patriotism, or love of our country is all very good and fine, but the fervour that is colouring it these days is falling into the trap of nationalism that should be a reminder of where the pre-World War extreme pride in country led nations to countries belong to those who inhabit it with pride, and that pride should come from its ability to give its citizens freedom to be, from its accomplishments in a global world that is built on inclusion, not exclusion.

Moreover, this pride in oneâ€™s country is not one that can be dictated by any particular governmentâ€™s leanings. This seething nationalism as dictated by one party is populist for it is the easiest thing to arouse the masses on the basis of religion and country.

The rational voices are being side lined, and the mass hysteria that is building up in the name of protecting girls from marrying into other religions or protecting the cow at any cost or any other, is not patriotism. And it has become necessary to remind our countrymen, and reiterate in every way that not everybody needs to have the same values, beliefs, religion, or eating habits to be Indian.

As Mark Twain famously said, â€?Patriotism means supporting your country at all time and your government when it deserves it.â€? Today, more than ever, our country, and the secularity of its essence that is enshrined in the Constitution need our loyalty.

To protect the essence of what being Indian really means, we need to turn to the wisdom of our founding fathers. Governments will come and go; what is needed to be us, to be Indian, is the sacredness of our plurality. That is the patriotism India needs from all of us today.