The Next Panjab Kaur

The Next Panjab Kaur 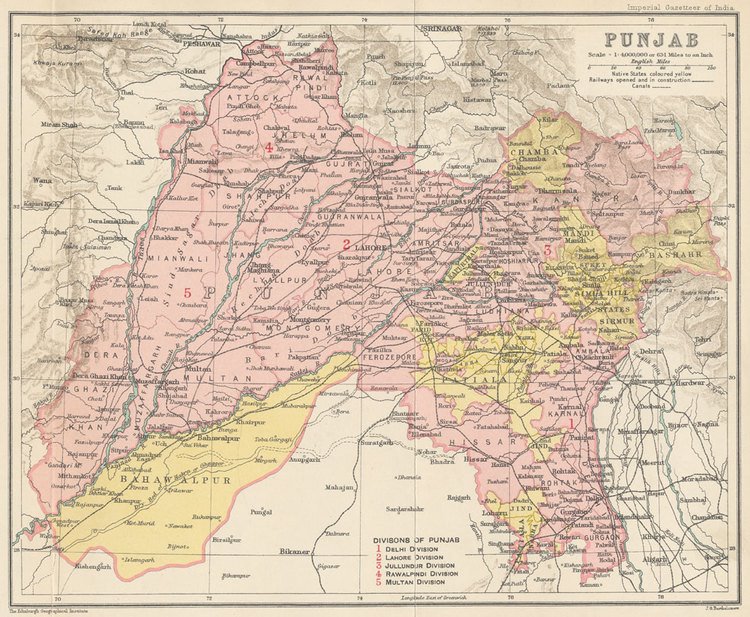 Do you recall Panjab Kaur?

Ramrai was Guru Harirai Sahibâ€™s eldest son who was sent by the Guru as his emissary to meet Aurangzeb in Delhi. Ramrai displayed up to 72 miraculous powers in Aurangzebâ€™s court. He was excommunicated from the Sikh Panth by Guru Harirai Sahib for distorting Sabad in the court of Aurangzeb. He was rewarded a dera (seat) in Doon valley, hence Dehradun, by Aurangzeb. Ramrai flourished and set up ashrams all over Panjab.

Hearing upon this, Guru Teghbahadur made this remark:
That Ramrai had not done a noble deed with the display of miracles,
Although he earned a cheap reputation for himself,
But he had set a bad precedent for his successors. (40)
Ramrai by making a show of his miraculous powers,
To which the Muslim messenger had made a reference,
Had committed an offensive deed unbecoming of spiritual saints,
And thus damaged the spiritual credibility of all saints. (41)

Ramrai through revision and interpretation of the Sabad becomes acceptable to the Mughal rulers. He changed â€?musalmanâ€? (Muslim) to â€?beimanâ€? (dishonest).

Two Guruships later (Guru Harkrishan Sahib and after Guru Teghbahadaur Sahibâ€™s martyrdom), witnessing Guru Gobind Rai (Singh after 1699) Sahibâ€™s activities in Sirmaur state in 1685, Ramrai wanted to meet the Guru. Remorseful and ashamed, and fearful of Masands like Gurbakhsh, he asked for a secret meeting with the Guru.

[Kirpal Chand asked:] Why does Ram Rai wish to make the meeting between the two members of the same family such a secret and highly mysterious affair? We all respect Ram Rai for the many wonderful qualities he possesses â€?

[The Guru said:] I understand why Ramrai wishes to make this meeting, a highly private affair. The Masands of Ramrai have become highly over-bearing and domineering. He is afraid that they might stand in the way of our meeting and foment trouble.

The Guru met Ramrai on the banks of Yamuna river between Paunta Sahib and Dehradun.

â€?I am fortunate to have obtained a sight of you,â€? said Ramrai.

The Guru is very forgiving. From there onwards, Ramrai became of the Guru and left no injunction to be heir apparent claims or sect headship.

In September 1687, the Masands were led by Gurbakhsh who was largely responsible for Ramrai's estrangement with the three Gurus (NVIII-NX). He now saw opportunity to annihilate Ramrai and capture the wealth and power of his Ashram.

Sewa Singh in Shahid Bilas describes Gurbaksh â€?as the most ignoble dunce, a stupid rascal, a corpulent and haughty rogue and a bullÂ?headed egoist.â€?

The masands killed Ramrai by burning him alive one day when he was in trans-like state. They took possession of the property and funds. They forcefully cremated Ramrai against Panjab Kaurâ€™s wishes. Panjab Kaur was Ramraiâ€™s wife.

Now, imagine the circumstances of Panjab Kaur. Husband was of the Guru, then violated the Guruâ€™s injunctions, excommunicated by the Guru, rewarded by the state against the Guru, reunited with the Guru, hated by the masands for rejoining the Guru. Her fearlessness becomes evident in how she deals with incredibly tough circumstances while men around her create chaos for authority and wealth.

Panjab Kaur sent a message to the Guru, prayed for the Guruâ€™s advice and assistance. The Sovereign-Guru is always Gracious (sahib mera miharvan). She prepares, she executes, and she asks only the Guru!

Panjab Kaur invited all the masands for a feast to announce the successor to Ramrai. Each masand wanted to be the authority for a particular region to parallel the Guru. Panjab Kaur called for the Guru once all masands had arrived. Immediately, the Guru with a Sikh expedition left from Paunta Sahib.

â€?Next day Panjab Kaur requested the Guru to punish the masands. Some of them suspected what was in store for them, but fate was too powerful to allow of their absconding. The Guru recalled to memory all their crimes and misdemeanours. They used to go to the houses of Sikhs to take intoxicants, and frequent the society of courtesans. They used to boast that the Guru was of their own making, and, if they did not serve him, no one would even look at him. They practice oppression in every form; they embezzled offerings made to the Guru and committed many other enormities. The Guru accordingly meted out condign punishment to the guilty among them, and rewarded those who remained faithful to Panjab Kaur.â€?

Gurbaksh took refuge in Lahore and with the Mughal rulerâ€™s help, took over Ramrai Ashram in Lahore and declared himself to be Ramraiâ€™s successor. From Lahore, he campaigned against the Guru.

After the Guruâ€™s Joti-Jot (Light merged with Light, Sikh parlance when the Guru left this earth for the Guru lives in the Granth-Panth), Mahant Gurbaksh â€?Ramraiaâ€™ expedited campaign against the Khalsa Panth. It was in this context, the re-appropriated â€?Ramraiasâ€? were excommunicated. Even then, it was a social boycott, not a condemnation!

On the other hand, the relationship of Panjab Kaur with Mata Sundri and Mata Sahib Kaur was most amicable after Guru Gobind Singh Sahib left this earth. She proved to be well versed in administration and organization of the followers who joined the Guruâ€™s abode and ended Ramraiâ€™s sect. She set up a panthic code of conduct for all future incumbents of Ramrai's Ashram who followed the Guru Granth-Panth. She died in 1740. She personified what the Land of Five-Rivers must learn to withstand, and then rise with the Guru.

â€?Masands were local community leaders who took care of the Sikh congregations in various parts of India. Guru Arjan had started the masand structure, which initially helped in the expansion of the Sikh faith. Over time, however, they became neglectful of their religious office and started taking advantage of their intermediary position by exploiting innocent Sikhs. An early Sikh feminist, the sagacious Punjab Kaur, brought the hypocrisy and tyranny of the masands to Guru Gobind Singhâ€™s attention. She fed Guru Gobind Singhâ€™s determination to abolish the oppressive masand system.â€?

About 200 years later, Bibi Balbir Kaur, embraced martyrdom at Jaito Morha in 1924 while freeing the Gurduaras from the mahants and the British India. Her non-inclusion by the Jathedars and the fellow Sikhs produced a befitting reply: â€?I too have partaken Guruâ€™s Amrit.â€? And she marched on, defying even the activist men, uttering â€?Eternal Identity, Awesome Wisdomâ€? (sati namu, vahi guru). And bullets pierced â€?Strong Warriorâ€™ and her infant; both were called home to rest by the â€?Rider of the Blue Steedâ€™ (nilevalarefers to Guru Gobind Singh Sahib). And hundreds of Bhunjangans followed! Bhujang in Sikh parlance is Guruâ€™s warrior who provides the antidote to snakeâ€™s venom, i.e., removes the oppressorâ€™s poison (not performing Kundalini yoga in a snake-like posture).

The situation nearly 300 years later is the same. Neo-mahants installed by the current rulers are looting Sikhs of their heritage and funds. Singhs also do not allow Kaurs much space either, though the Guru uprooted the prevalent patriarchy and pollution nonsense and replaced it with light-filled and love-decorated sovereigns. (â€?jagat jotâ€™, â€?puran premâ€™).

I recall visiting Gurduara Shahid Ganj Kaurs (popularly Singhanian, but she is of the Guru who called her Kaur, didnâ€™t create her from the Singh) in Lahore, Pakistan. Thanks to the Bhangi Misl the monument still stands. From 1748-53, Mir Mannu was on a genocidal campaign. The orders were to kill Singhs, capture Kaurs and children. Kaurs worked as prison laborers, were brutalized and raped, witnessed their children tortured and cut to pieces. Their limbs-flowers were fashioned into garlands, draped around the Kaurs' necks. Eventually, they were starved and worked to death.

Mannu is our sickle,
We the fodder for him to mow,
The more he cuts,
the more we grow.

How do you think we grew?

Hundred years ago, there were Khalsa Bhujangan Divans, Bhujangan Councils, and Bhujangan Patar, founded in partnership with Bhunjangis who were only of the Gurus. Today, where are they?

The â€?Darkness-to-Lightâ€™ (Guru in Sikh tradition) via Ik Oankar (the Force) asks us to become the Oneness without any iota of a doubt. And it shares the Sabad-wisdom treasure in the feminine voice. At personal level, the Guru deemed only the voice of one pinning in love is most powerful and the one who weds the Beloved is the most celebratory. Her voice elevates the self to realm where thought-feeling are in sync. At society level, the Guru is busy demolishing the patriarchal hegemony of men for their voice for the Divine was non-inclusive and their practices filled with impurities of the mind.

Now celebration under Jhande-ka-Mela at Dehradun is fully revised to suit the current mahant while the neo-mahants in Panjab, Delhi and elsewhere are elected by the current rulers. Diaspora rots from a similar electioneering though the state is a non-factor. The so-called spiritual and political men collude to control Sikh funds and platforms.

Guru Gobind Singh Sahib replaced the mahants with the Khalsa. People were weak and insecure. The Khalsa was trained like a Star War Padawan personally by the Guru before being inaugurated as a Jedi on Vaisakhi of 1699. They were authentic Kaurs and Singhs, focused on removing psychological and political oppression.

The next Panjab Kaur will rise to lead thirty million Sikhs. She will recall the Guru even amidst trying circumstance of ignorant family and hateful society.