Demonetisation, all the pain no real gain

Demonetisation, all the pain no real gain 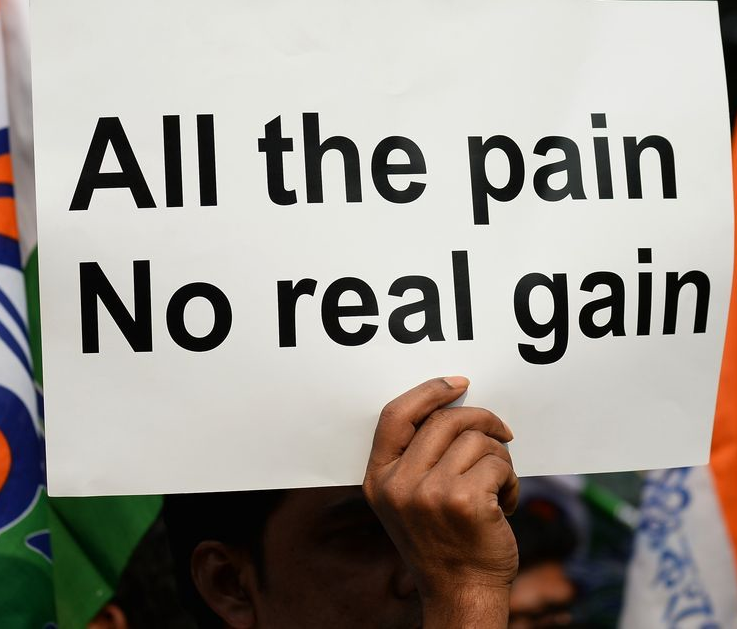 On November 8, 2016 when Prime Minister Narendra Modi took the bold decision to demonetise the Indian currency, the country was divided. Some couldnâ€™t grasp the logic behind it where as some became the foot soldiers of the war against black money.

The division was marked in the economic experts, where on one side it was being hailed as the best economic decision and other side was scathing in its criticism.

The former Prime Minister Manmohan Singh went far as to call it an â€?organised lootâ€? and a monumental disaster. PM Modi took all the responsibility for the move and asked for 50 days of patience by which he personally assured the nation that all will be well.

Before we define â€?wellâ€? letâ€™s examine the targets for which DeMo was implemented.

Black Money: After failure to get the black money from the off shores, government decided swoop up all the money lying in the country. After eight months, RBI finally had the courage to tell the country that 99%of the money has come back to the banks, with only 16,000 crore pending.

So was the former PM Manmohan Singh, right in his criticism of this hastily drawn and executed plan? Was there no black money in the accounts or did the banks collude to get the black converted to white, legalising all the tenders? In fact, with introduction of high tender currency, the ease of hoarding money will increase. The developed nations limit the currency value to 100 or 50 so as avoid hoarding but â€?DeMoâ€™ unwittingly made hoarding easy.

Terror Funding: DeMo was also targeted to stop the flow of terror funding especially in J&K and North East. J&K has had an increase in the deaths of soldiers and civilians and incidents of terror have been on a rise. Terror in North east has been on a decline since 2009 and has continued its pace with no greater speed that could be alleged to Demo.

Fake currency: There was .008% fake currency which was a loss to some black marketers but since there were new security features added to stop this market. As expected, black market was back on the track within a short time period.

These facts were probably became evident to the government too so they changed the reason for DeMo to digitisation of the transactions. There was a surge initially but by June 2017, the number of transactions was back to the November 2016 level. The amount of cash is back to the figure of Rs 17 lakh as it was before DeMo. Farming, charities, religious institutions are back to operating in cash.

Before finally declaring DeMo as a complete failure, letâ€™s look at the cost to the nation. DeMo was to bring a windfall of 3-4lac crores which was governments expectation of black money in the country. But it ended up costing the country 7000cr extra in printing of the new currency. Business lost approx 61,500 crores, banks lost 34,140 crores,15,000 was the loss of income to the common man who had to leave work to queue up. Around 15,000 small enterprises shut down, womensâ€™ personal saving were wiped out. And letâ€™s not forget the 100-120 lives lost in the queues.

All these facts are corroborated by the colossal drop of 2%in GDP which was the exact no predicted by former PM Manmohan Singh, a master economist who had taken the Indian economy to develop at 8 -9%. This 2% drop will cost the nation 3-4 lac crores.

But the government still says DeMo was a success. It quotes the 19% increase in the tax payersâ€™ base.

If we look at previous years, the income tax payersâ€™ number has been rising year after year. In 2013-14 the numbers recorded an increase of 38%, in 2016 showed an increase of 27%. And that too without DeMo.

So DeMo had a reverse impact on one area government declares victory. IT figures also showed that the most of the new tax payers are in the 2.7 lakh PA income bracket. So no black money nor an expected increase in the government income from a wider net of tax payers.

After all the facts and figures given by the government and the RBI are examined, DeMo would probably go down as a case study in all the economics books. For an economic failure that ended up claiming lives and crushing development of an emerging super power.

Those who are claiming it to be a philosophical victory should not call themselves economists and don the garb of a politician or godman who can lie to increase their personal power and worth. DeMo was a Jumla that failed miserably and nation deserves an apology from the PM himself.