â€?Every child comes with the message that God is not yet discouraged of man": Rabindranath Tagore

â€?Every child comes with the message that God is not yet discouraged of man": Rabindranath Tagore 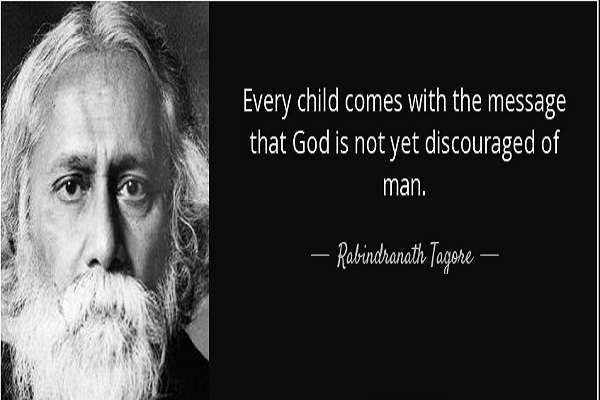 Each year, on the fourteenth of November, we celebrate Childrenâ€™s Day in India, in memory of Prime Minister Nehruâ€™s famous love of children and roses. He compared the former to the latter, saying that children, like roses, needed to be nurtured carefully for they were the future of the nations.

And yet, what is it, in reality, that we are passing down to our children? Hunger, violence, diseases, an environment that is as tainted with pollutants as it is with hatred. We seem to have deprived our children of their childhood. My own childhood is a place of happiness I like to revisit, but that happiness came from being free. There was safety in neighbourhoods and parks. There was fresh air to breathe and one did not have to worry about allergies and injected fruits. One went to school serenely, not wondering about death or sexual molestation. Perhaps I exaggerate; perhaps dangers were there then too, but definitely not the way we seem to be buried under them as we are today.

According to reports of International agencies like Unicef and the World Bank, the Indian child is among the most disadvantaged in the world. Statistics show that every 15 seconds claims the life of one more child under the age of 5 years in our country, giving us the horrifying figure of some 2 million such deaths annually. Additionally, in a country whose food-grains are exported, and immense wastage caused by the rotting and wastage of food-grains in go-downs, five thousand children die every day in India from hunger and hunger related diseases. Yes! Five thousand daily!

In our capital city today, children are breathing poison. Is this the legacy we want to hand down to our children? Masks and inhalers and the lungs of a person who smokes fifty cigarettes a day? Each year, we are aware of what will happen in November, but the entire year passes with no strategies to control the various ways in which we are polluting our air. Knee jerk reactions post the event, when the situation has assumed critical and emergency levels is hardly helpful. Nor are the citizens protests or the governmentsâ€™ blame game. We know the dust from construction of the metro around Delhi will add to the problem and yet we have no dust monitoring mechanisms or penalty. We know the burning of stubble in fields is going to toxify the air, but beyond blaming the farmers, the government has placed no bans or provided alternate means to already debt-burdened farmers. We are aware of what will follow post Diwali, and yet we debate whether bursting crackers is a fundamental religious right! Again, our country takes on the dubious mantle of having the most deaths due to pollution. According to the Lancet Commission on Pollution and Health, 2.5 million Indians died early due to pollution levels. Nine millions deaths were attributed to pollution in 2015. How much worse does it have to get before we take pre-emptive action? According to a UN report, 570,000 children die annually from respiratory disorders caused by environmental pollutants. This is the air we are giving to our children.

Our children are becoming accustomed to living in a violent world. Whether that child is Pradyuman Thakur or Junaid Khan who gets killed by a mob on a train because he is a Muslim or five year old who gets raped in her classroom by a forty year old peon, our children are inheriting an atmosphere of fear. Learning to look around them without the trust they need to look at the world with. We might today be celebrating children and childhood, but still more and more children are being abused and violated. Child marriage and rape continues for many; these little girls who are raped by their much older husbands have no idea what childhood means. Children work in hazardous jobs, they are underpaid, slaved and ill-treated. Even in so-called normal families, children are unaware of what the freedom of childhood we felt as kids is. Now, nearing fifty, I can look back and realise the truth of what my parents used to say all the time, â€?Enjoy these years, you will remember them as the best time of your life.â€? I wonder if our children will be able to remember their childhood with the same fondness? Times have changed no doubt, but will they remember having spent more time interacting with their gadgets than playing with friends? Will they remember laughing with their parents or seeing their parents on their mobiles?

I have often heard my childrenâ€™s friends say things that have wrenched at my heart. â€?I hardly see my dad or mom,â€? â€?Iâ€™m not allowed to go out to play in the park; I have allergies,â€? â€?Iâ€™m not allowed to go out without my didi, its not safe,â€? â€?Most of my conversations with my parents are about college applicationsâ€?.how to get there.â€? There is little of childhood in these words; very little of the carefreeness I associate with my childhood. Why is it always about â€?getting thereâ€?? Why donâ€™t we teach them that they have reached; here in life. They are here to live this life, not to get somewhere. Parents and teachers are not giving real life lessons about the things that really matter in life. How to be happy, how to find peace, how to be of service to the world, how to laugh, how to keep your inner child and innocence alive in this very corrupting world. There is too much children have to face these days. Social media exposes them all too early to so much we learnt much later in life. It also puts pressures on them we might not be able to relate to. Pressure to look good, about their weight, about being seen with the â€?rightâ€™ group or at the â€?rightâ€™ party. Marks are skyrocketing, while admissions into schools and colleges are getting harder. There are no hours spent idling and daydreaming or playing cricket in the parks.

Maybe this childrenâ€™s day, we give our children not mere lip service. No speeches in school and a show put up for an hourâ€™s entertainment. Maybe we just connect with them. Tell them about your values, what is important to you and why, share your history, your stories. Listen to them. Instead of reminding them of their responsibilities, let them be children for a day. Without stress. Not the rituals of celebration, but real connection with the child inside your child and inside you as well. This childrenâ€™s day, put your phones down, play, talk, take them to an orphanage, let them see how little some of the world takes for granted. Make them a little less entitled, a little more caring, for they have to inherit this world and correct the mistakes we have made.