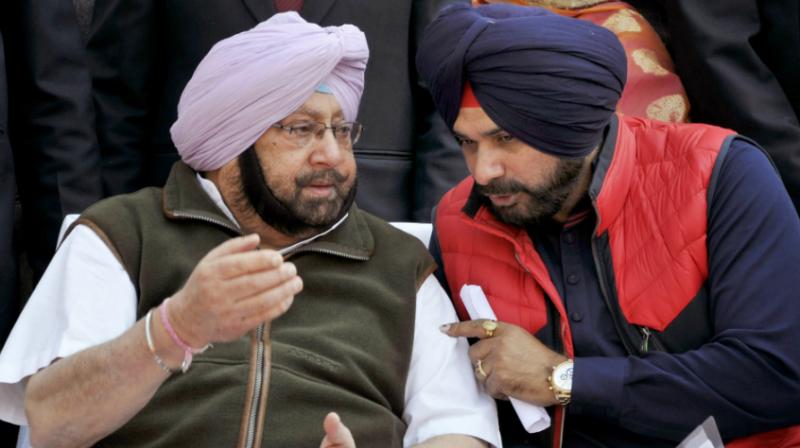 Chandigarh: Punjab CM Captain Amarinder Singh has accepted Navjot Singh Sidhu’s one-line resignation and forwarded the same to the Governor.Disclosing this here on Saturday, an official spokesperson said Captain Amarinder, who had been indisposed for the last two days, since arrival from Delhi, saw the resignation letter this morning.

He has sent the same to Governor VPS Badnore, for formal acceptance.The Chief Minister had earlier, in Delhi, said he would see the resignation letter, which was received at his Chandigarh residence in his absence, and take a decision. The letter, however, was just a single sentence tendering Sidhu’s resignation, with no explanation or elaboration, said the spokesperson.

Sidhu had reportedly sent his resignation on June 10 to Congress president Rahul Gandhi and tweeted the same more than a month later. Thereafter he had tweeted that he would formally send his papers to the Chief Minister, in whose cabinet he had been allocated the Power Ministry as part of a reshuffle post the Lok Sabha elections.

He finally sent his resignation to Captain Amarinder’s official residence while the latter was in Delhi.It may be recalled that Sidhu had refused to take over his new portfolio, which the Chief Minister himself has been monitoring during the ongoing crucial Paddy season, with a harsh summer sending the power demand in the state to unprecedented levels.

■Sidhu Damaging Congress With ill-timed Remarks, Says Capt Amarinder
■Capt Amarinder To Take Up Sidhu Issue Soon With Congress High Command
■Capt rejigs portfolios of all but 4 ministers; Sidhu loses local govt.
■IF SIDHU DOESN’T WANT TO DO HIS JOB,THERE’S NOTHING I CAN DO ABOUT IT: CAPT AMARINDER
Advertisement