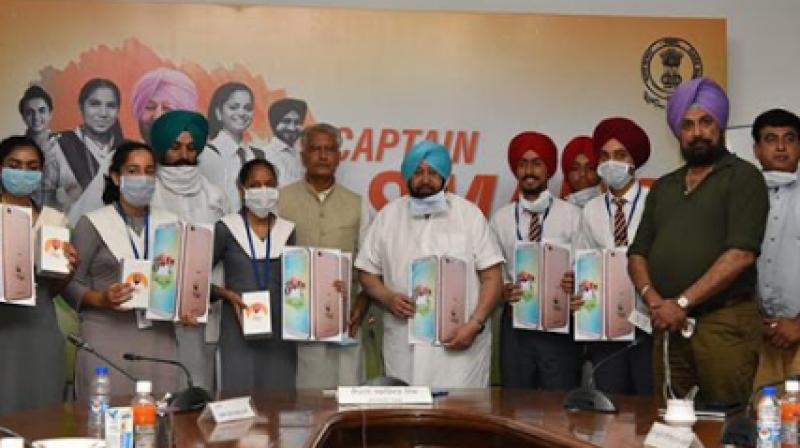 Simultaneous distribution of phones was done at 26 places by various ministers, MLAs and others across the state to kickstart the scheme. 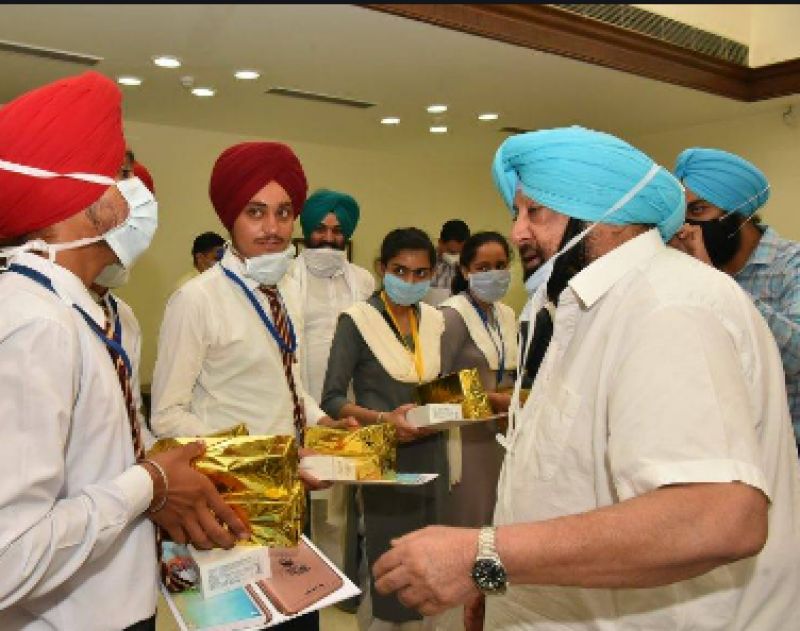 PhotoEach minister today personally handed over 20 phones each in various districts to mark the launch of the scheme, which marked the fulfilment of another major poll promise of the Congress government in the state.

The scheme, for which Rs 100 crore was allocated in the state budget for 2017-18, is benefitting a total of 174015 Class XII students of government schools in the first phase, to be completed by November 2020.

Of these, 87395 are boys and 86620 girls, with majority in the OBC and SC/ST categories – thus bridging a major divide that was obstructing these students from affordable access to online/digital education.

While 36555 beneficiaries are OBC students, 94832 are SC and 13 ST students. The bulk of the students – 111857, are from rural areas, and the remaining in urban government schools. 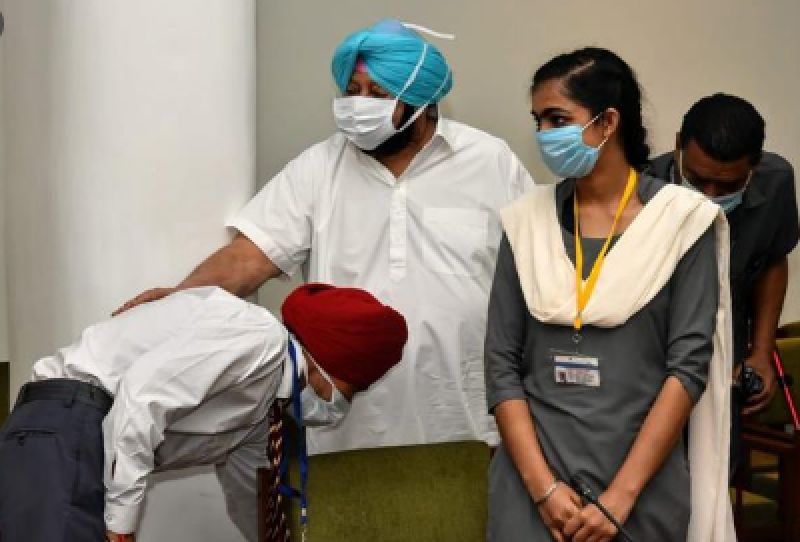 Captain Amarinder Singh, who launched the scheme on the auspicious occasion of Janmashtami and International Youth Day through video conferencing at the Secretariat this afternoon, said people believe in the promises listed in the election manifesto and it was, thus, his duty to ensure the implementation of each one of them.

When the Congress listed Smart Phones as a poll promise, it was to provide global connectivity and empower the poor youth who could not afford them, said Captain Amarinder, adding that in the present pandemic situation, these phones had assumed a bigger importance as they had become a necessity for education continuity.

It was the money of the people of Punjab which his government was spending on advancement of the youth, he said, adding that the phones were planned to be distribute in March but the process got delayed due to the Covid crisis.

The Chief Minister said he wanted Punjab’s students to be abreast with the latest technology which they can use effectively for their education, which leverages technology in a big way today.

Gone are the days of chalks and boards, he said, adding that the Government schools, which had seen a major transformation over the past couple of years, needed to be supported through technological initiatives by the state government. 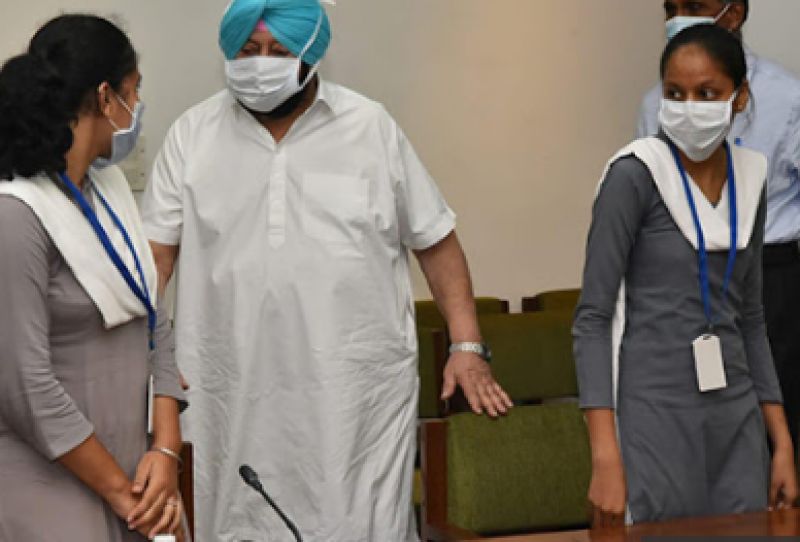 PhotoThe smart phone being distributed under the scheme was a good functional phone, which also looks smart, he said, adding that it will become a major tool for the education of the students. Captain Amarinder congratulated the students on this occasion and also greeted them on the occasion of the International Youth Day and Janmashtami.

Gagandeep, a girl student and a labourer’s daughter from Hoshiarpur, told the Chief Minister on video that though she had got 85% in Class XI she had lost out severely in studies over the past few months due to lack of smart phone. With this phone, she said she would now be able to fulfill her dreams. The Chief Minister assured her of all help to pursue her dreams.

Pointing out that the Smart Connect scheme was in line with the vision of the Chief Minister, as manifest in the party’s poll manifesto, Education Minister Vijay Inder Singla said it would help government school students download course material and old papers etc to prepare for their Board exams. 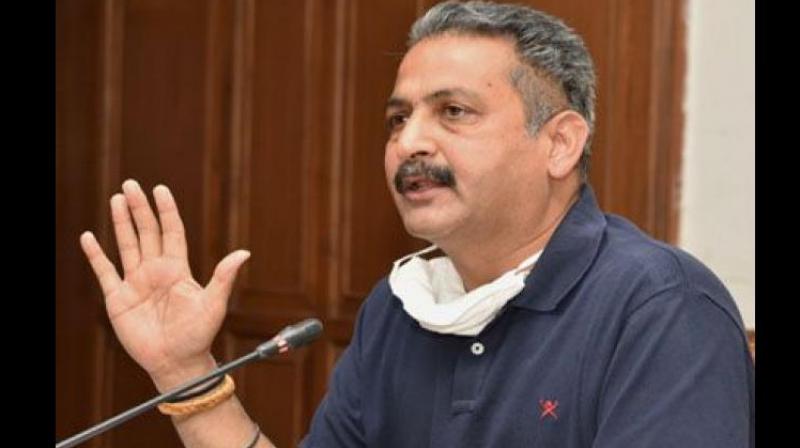 Vijay Inder SinglaIndustry Minister Sunder Sham Arora said his department, which was entrusted with the task of purchase, had bought one of the best smart phones in the market.

The scheme would prove to be a boon to the needy students, in particular, in government schools which were at a disadvantage viz a viz private schools in terms of access to technology, specially amid the Covid pandemic, which had necessitated a shift to online education.

The government had done this despite the acute financial crisis in the state, he said, ridiculing the Opposition’s criticism on this count. He asserted that the Captain Amarinder led government will successfully implement every single promise made to the people of Punjab.

Punjab governmentPunjab Pradesh Congress Committee (PPCC) president Sunil Jakhar said the scheme would break the barriers of poverty, with even SC/ST and OBC students getting access to online education.

The smart phones had become a necessity in these pandemic times, he said, adding that making youngsters tech-savvy was also a major step towards making them employable.

The SAD-BJP government of the past had promised computers, laptops, tablets etc but had failed to deliver on its promise, as had the BJP-led government at the Centre, he said.

Punjab Youth Congress (PYC) president Birender Dhillon said the fulfilment of this promise inspite of the prevailing economic crisis in the state had once again shown that Captain Amarinder believed in delivering on what he says – a characteristic which distinguishes him from other politicians.

Going forward, the Industry department would be procuring more phones, through Punjab Infotech, and the distribution will be undertaken through M/s Lava, which has been selected as implementation Partner to deliver and distribute smart phones to Youth in the State. The department of Sports & Youth Services is the administrative department.