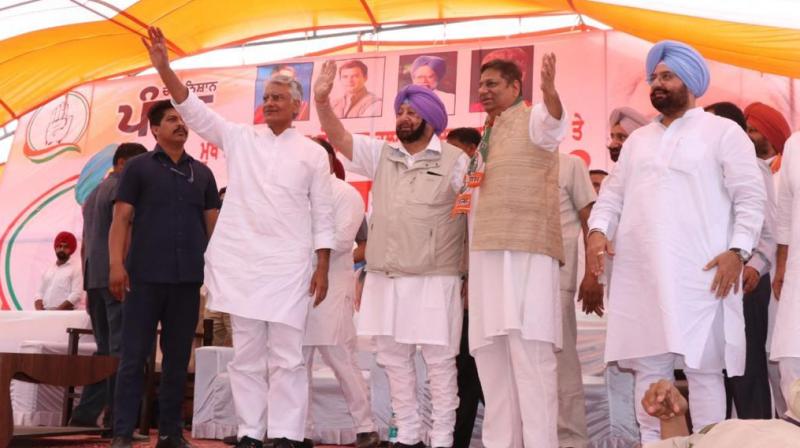 Batala (Gurdaspur), May 11: Punjab Chief Minister Captain Amarinder Singh on Saturday trashed as mere wishful thinking Prakash Singh Badal’s shameful statement that the people of Punjab had forgotten the Bargari sacrilege incident. The Akalis are desperately hoping and wishing that is the case, as the Badals have no defence or justification to show how the sacrilege cases could take place under their noses without their knowledge, the Chief Minister said at an election rally in support of Congress candidate from Gurdaspur, Sunil Jakhar.

“The Akalis may hope and want that people to forget about Bargari and other incidents but that will not happen, and they will have to pay for their sins,” he added. They will face the consequences of their actions, declared the Chief Minister, adding that the Akalis led by the Badals could not escape punishment for their involvement in killing innocent people. With Prakash Singh Badal as chief minister and his son, Sukhbir, then the deputy chief minister and home minister of the state,

they would have definitely known about what was happening in Bargari and other places like Behbal Kalan and Kotkapura, Captain Amarinder said, accusing the Akalis of trying to polarize Punjab, which had been through tough times for 20 years, through the sacrilege incidents. Asserting that the Congress does not believe in interference in religious matters, Captain Amarinder said he was ready this time, however, to help anyone who could dethrone the Akalis from SGPC and free the religious body of its political shackles.

Negating any contest from BJP’s Sunny Deol to Jakhar, Captain Amarinder said that in sharp contrast to the Congress leader, who had been working in every corner of the constitutency for the past 18 months, the actor had no interest in the welfare of the people of Gurdaspur. Sunny has come from Mumbai in search of a career in politics since his acting career has virtually ended, said the Chief Minister, adding that the actor had no stakes in Gurdaspur. Captain Amarinder predicted that Jakhar, with his strong connect with the people, would lead them as the state’s chief minister one day. Pointing out that even after being named BJP candidate from Gurdaspur, he was spending his time campaigning in Haryana and other places, the Chief Minister said it was clear arrogance towards the voters, whom he will now show his face again after the polls.

Terming Pulwama as an act of cowardice, the Chief Minister lashed out at Narendra Modi for seeking votes in the names of those who died in the attack, and in the name of the Balakot air strikes by what he claims to be his army. “It is not Modi’s fauj but India’s fauj that has fought all battles and has made sacrifices,” said Captain Amarinder, calling Modi’s attempts to take credit as abominable. Nobody ever saw Indira Gandhi take credit for dividing Pakistan in 1971, she gave full credit to the armed forces, he pointed out.

The Chief Minister reiterated his demand for in toto implementation of the Swaminathan Commission report to end the woes of the suffering farmers. He also announced his acceptance for the local people’s demand for a mini secretariat in Batala. Earlier, Punjab cabinet minister Sukhjinder Randhawa blasted SAD leader Bikram Singh Majithia for his derogatory comments against SIT member IG Kunwar Pratap Singh, and warned that the former minister would end up in jail for his misdeeds.

Appealing for support and votes from the people, Jakhar raised concerns about the absence of any inquiry to fix responsibility for the Pulwama incident, to find out why SOPs for troop movement were not followed. Everyone had apprehensions that Modi would resort to desperate measures before the Lok Sabha polls by inciting communal tensions or escalate tensions with Pakistan, and then Pulwama happened, he pointed out, questioning how the attack could take place despite sufficient intelligence inputs.

Accusing the BJP of inflaming passions for votes, Jakhar said Modi will do anything to stay in power. Even the Kartarpur corridor would be sacrificed to BJP’s interests as they would continue to escalate  tensions with Pakistan over the issue as part of the vote politics, he warned, adding that if the Corridor is to become a reality then it was important to vote out Modi, who had done nothing for Punjab in the past two years and had not given a penny to the state for the 550th Prakash Utsav of Sri Guru Nanak Dev Ji. Jakhar said Modi had no explanation to give on any serious issue, including Rafale, Ayodhya, farmer suicides and the killing of innocent soldiers at the borders of the country, as he was only interested in further his own political and personal ambitions.