Rahul Lashes Out at Modi For Endangering Lives of IAF Pilots, Says Rafale Deal Was Delayed To Accommodate Parallel Negotiations 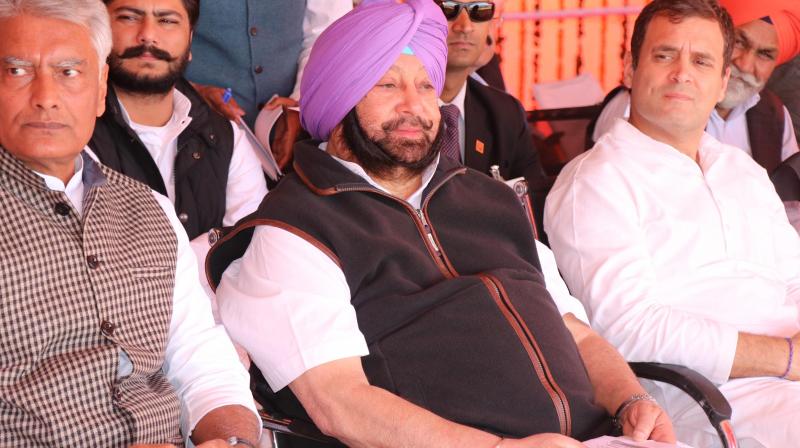 Killi Chahlan (Moga), March 7: The Congress today sounded its Lok Sabha poll bugle in Punjab with party president Rahul Gandhi and Chief Minister Captain Amarinder Singh launching a scathing attack on the ruling Bharatiya Janata Party (BJP) and its ally, the Shiromani Akali Dal (SAD), and exuding confidence of a total wipe-out of both the parties in the coming elections.

The two leaders, who were here to launch the fourth phase of the farm debt relief scheme of the Congress government in Punjab, exposed the total failure of the Modi government in implementing any of its promises for the welfare of the people and called for a resounding vote in favour of the Congress to oust the anti-people regime at the Centre. 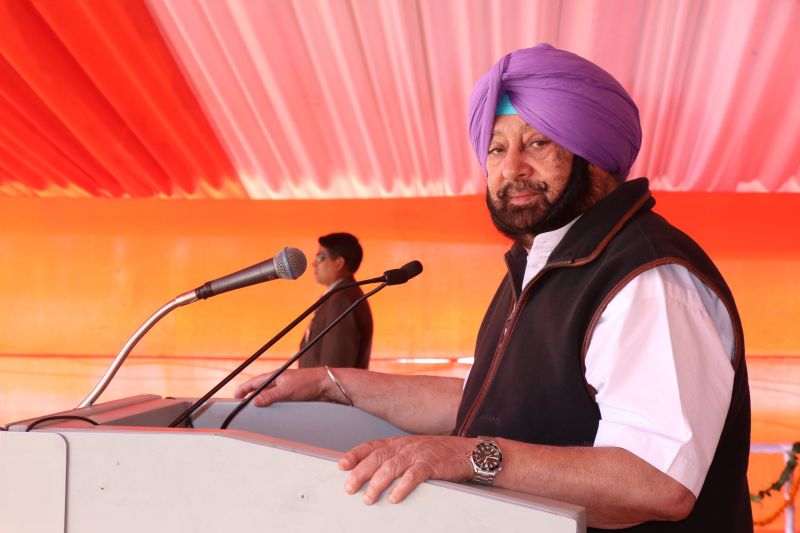 Even as Captain Amarinder Singh reiterated his Mission 13 to give all the 13 LS seats in Punjab to Rahul, whom he declared the next prime minister of the country, the AICC chief took on Prime Minister Narendra Modi for his failure on all counts and challenged him to a 15-minute debate on critical issues such as Rafale and farm loan waiver.

Rahul lauded Captain Amarinder Singh for the farm debt waiver scheme, of which the chief minister today launched the fourth phase to provide relief worth Rs. 200 Crores to more 15,000 small farmers, besides bringing Dalit and landless labourers into the purview of the scheme by waiving off Rs. 520 Crores of the loan of 2.82 lakh farm labourers. “We will protect farming at all costs,” the Chief Minister vowed, while Rahul declared that farm loans were being waived in all the Congress-ruled states, in contrast to the Modi government, which had failed to come to the rescue of the distressed farmers. 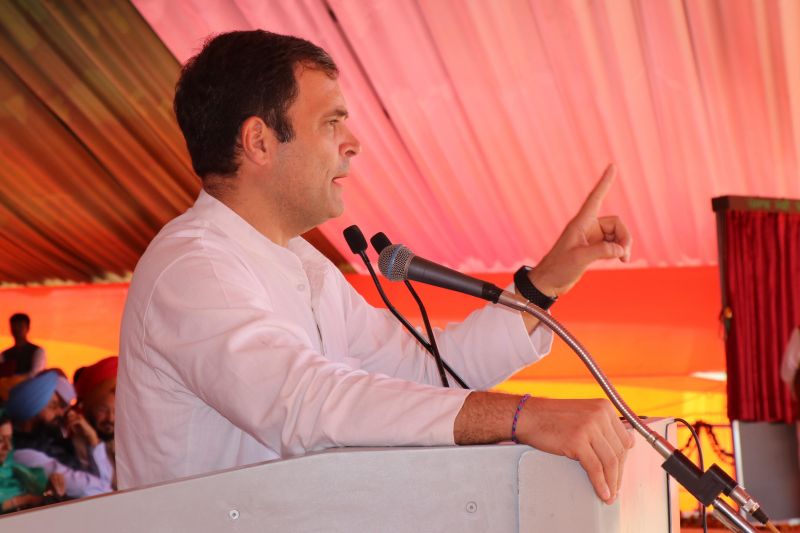 “If Modi can waive off loans of big industrial houses, why can't the loans of farmers be waived off,” asked the Congress president, lambasting the prime minister for tweaking the Rafale deal conditions to favour Ambani. Modi had played a cruel joke on the farmers by giving them Rs. 3.50 a day while giving industrialists crores of rupees as a gift, said Rahul, adding that the Congress, on coming to power at the Centre, would ensure a minimum guarantee scheme for all.

This chowkidar is clearly a chor (this guard is clearly a thief), declared Rahul, pointing to the Rs. 30000 crore benefit given to Ambani and the missing Rafale files, which would have shown that the arrival of the jets was delayed because of the parallel negotiations by the Modi government. The delay was costing the Indian Air Force (IAF) heavily, whose pilots’ lives had been endangered by Modi, said Rahul amid loud cheers. 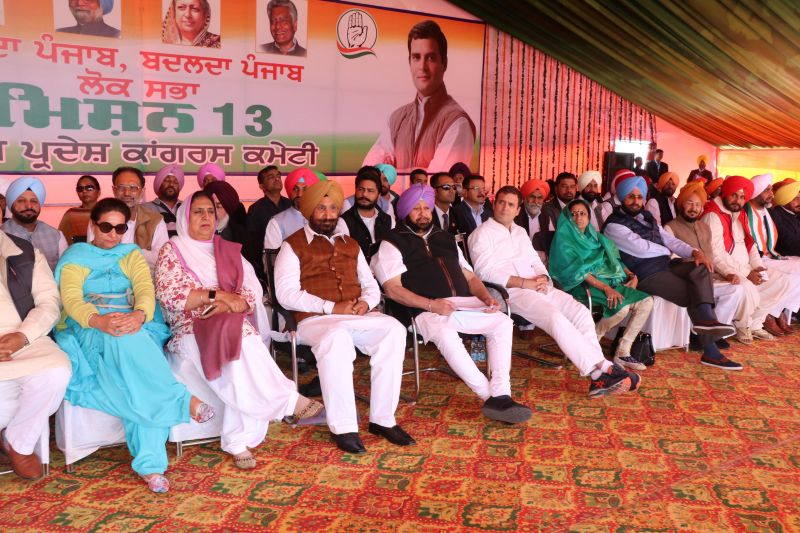 Rahul also came down heavily on Modi for failing to deposit the Rs. 15 lakh he had promised during the last elections to be given to each family, and asked the massive crowd whether any one of them had got the promised money. A loud NO was the answer from the crowd which cheered as Rahul lashed out at the Modi for cutting a deal with the Badals just before the Punjab Assembly elections in 2017 and the destruction of the informal sector with the reckless demonetization decision.

Accusing the prime minister of spreading hatred in the country, Rahul said the next election would be an ideological fight and Guru Nanak's philosophy of love and mutual respect would win. “We will celebrate 550th Birth Anniversary of Guru Nanak Dev Ji in a befitting manner,” he added. Even as he castigated the Modi government for not refunding Rs. 31000 crore of Punjab to the state and the ill-conceived GST, Rahul also questioned Union Minister Arun Jaitley for allowing Vijay Mallya to leave the country and demanded investigation against him. 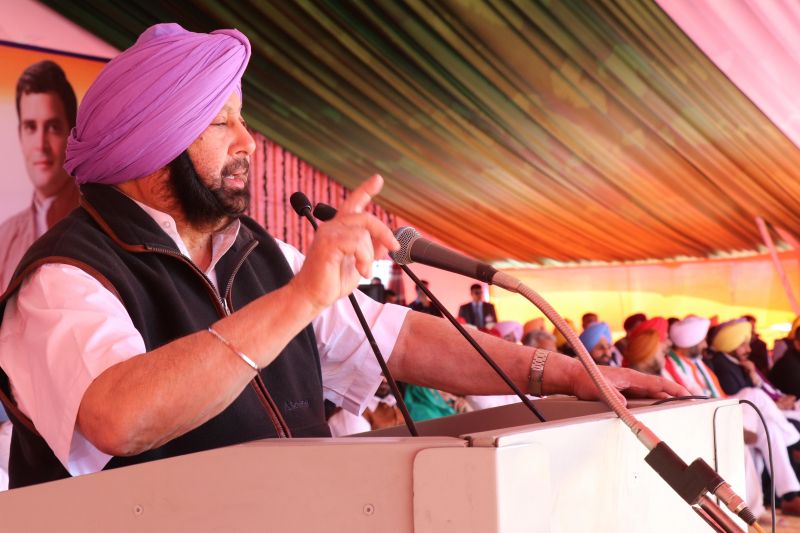 Jaitley had all the enforcement agencies at his disposal, Rahul pointed out, adding that the ED and the DRI were working under the control of the prime minister and he should direct them to catch the big fish of the drugs mafia and those who ruined Punjab. He, however, lauded the Chief Minister for breaking the back of the drugs mafia and said it was a matter of great satisfaction that youth were once again looking towards the future with hope.

The Chief Minister also flayed the erstwhile SAD-BJP regime in Punjab for bringing the state to ruins with the legacy debt of over Rs. 31000 crore, which had put a massive burden on the state and which the Prime Minister and the Finance Minister had failed to resolve despite his various petitions and pleadings. 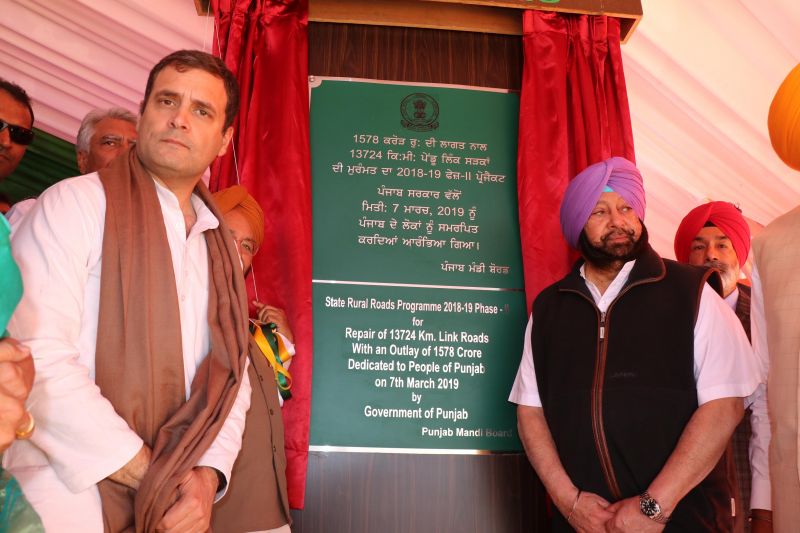 In sharp contrast to the misrule of the previous government in the state, his own government had successfully fulfilled all its major promises, including breaking the backbone of drugs, industrial revival as evident in the signing of MoUs worth Rs 65,000 Crores of which Rs 36,000 Crores had hit the ground already, and repair of more than 32000 kms of link roads already completed, said the Chief Minister. Not a single godown in the state is empty and his government was expecting a bumber crop, he pointed out, demanding that the Centre take responsibility to create space by moving stocks.

Observing that there were 43 incidents of desecration of the holy scriptures reported during the Akali rule, the Chief Minister said all had been solved since his government took over. He vowed not to spare even the mightiest of those involved and to ensure that each one of them goes behind the bars. 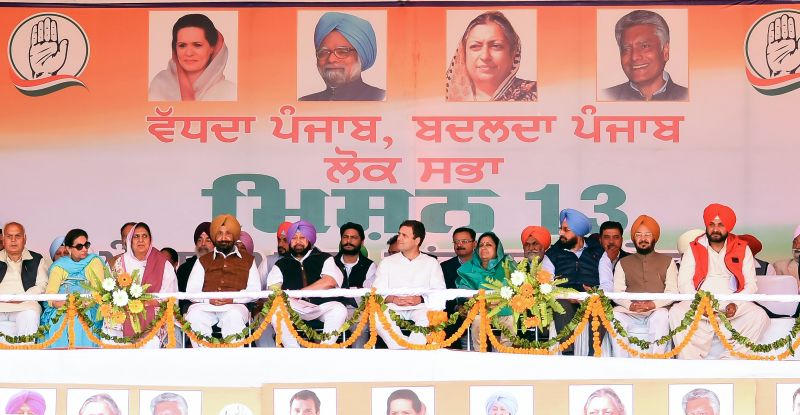 Earlier, PPCC Chief Sunil Jakhar lambasted Modi for forcing the country into war for political gains. He lauded Captain Amarinder Singh for building confidence amongst the people in an atmosphere of war hysteria created by war mongers. Captain Amarinder Singh stood with border residents in their hour of need, he said, adding that the nation needs statesmen like him. The people of this nation would throw the present Modi regime and would install the Congress Government under Rahul Gandhi's leadership, Jakhar added.

AICC Secretary in-charge of Punjab, Asha Kumari castigated the Akalis and the BJP for plunging a prosperous Punjab into the drug net. She expressed the confidence that under the dynamic leadership of Rahul Gandhi and Captain Amarinder Singh the state would regain its glorious past, the signs of which were evident from the successes of the last two years. The whole nation was looking towards the Congress to put it back on the path to progress, she added.