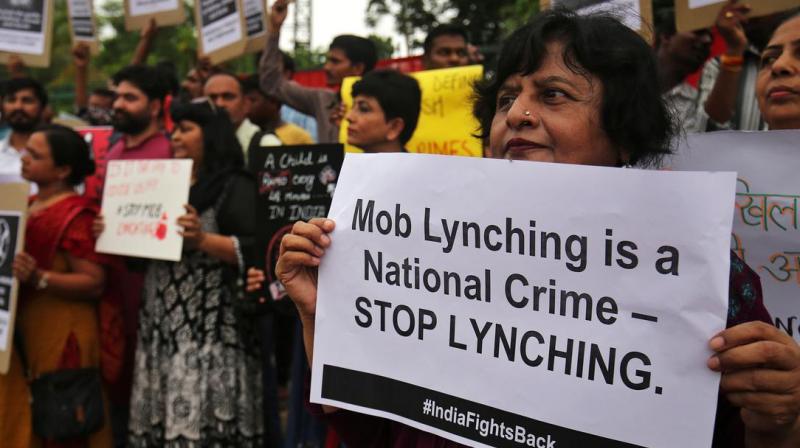 New Delhi, Mar 28 (PTI) A group of Muslim women from over 10 states Wednesday said the new dispensation at the Centre should bring a law against mob lynching. Ahead of the April-May parliamentary election, the women, including Khalida, the wife of alleged lynching victim Umar Khan, published a manifesto listing their demands.

The women, who came together under Bebaak Collective - a movement against hatred, demanded the political parties "restore" constitutional rights of women and minorities. "I live in constant threat. Even attending court hearings has become extremely difficult because of threats we receive from fringe groups," said Khalida, who came with her 14-month-old son.

"I don't want anyone to go through what my family is going through and that is why I request the political parties who is elected to power to frame law against mob lynching," said Khalida, a mother of eight.  Umar Khan was killed in 2017 in an exchange of fire with alleged cow vigilantes in Alwar in Rajasthan. Umar's body was found on the railway tracks at Ramgarh in Alwar district. His relatives and social activists subsequently alleged that he was killed by cow vigilantes.

Their demands included formulation of a diversity index across public and private sectors to determine extent of under-representation of Muslims, giving 10 per cent reservation to Muslims in higher education and government jobs. They also demanded monetary benefits for single women, introduction of a communal violence bill to bring perpetrators to justice and introduction of gender-just laws for minority groups.

"We demand repealing of prohibition and restrictions on slaughtering and sale of cows. The National Register of Citizens Bill strips Muslims of their citizenship rights and must be withdrawn," their manifesto said.