DRDO achievement pride for nation, let us not play politics on it: Ram Madhav 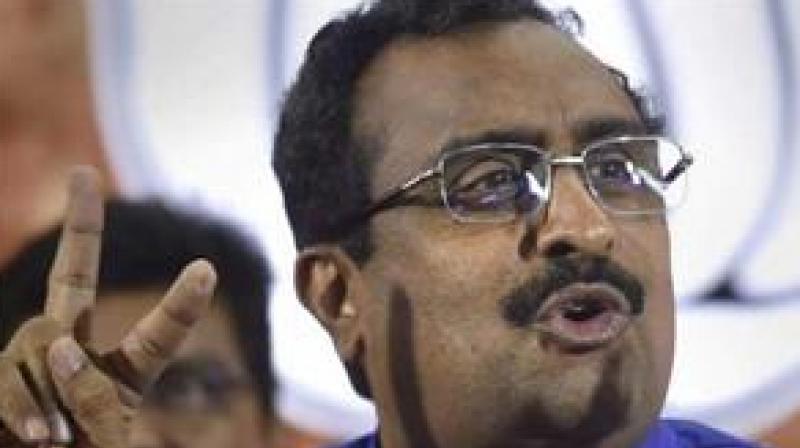 DRDO achievement pride for nation, let us not play politics on it: Ram Madhav

Jammu, Mar 28 (PTI) With the Opposition accusing Prime Minister Modi of trying to get electoral mileage by announcing amid the poll process the successful testing of India's anti-satellite missile ability, the BJP Wednesday cautioned political parties against playing "politics on the issue". Terming DRDO scientists achievement as a "pride" of the nation, BJP national general secretary Ram Madhav said "let us not play politics" on the issue.

Modi announced Wednesday that India demonstrated its anti-satellite missile capability by shooting down a live satellite, and described it a "rare achievement" that puts the country in an exclusive club of space super powers. "Let us not play any politics (on the achievement). The whole country takes pride in the achievement of our scientists," Madhav told reporters here.

Replying to a question on a reported Congress' claim that the country developed this capability way back in 2012, the BJP leader said, "If it was developed in 2012, I don't know why it was never tested or never told to the people."  "We have come to know about it through a successful testing today, so we give credit to our scientists for the great achievement," he added.

"The BJP congratulates the Defence Research Development Organisation scientists and the people of the country. It is a phenomenal achievement in the space power and has filled our hearts with pride. Congratulations to our government and the prime minister," he said.

The BJP leader said the successful testing has placed India in the elite club of major countries in the space technology and "it is a big achievement for India because cyber area is going to be future of all conflicts and the challenges the country is going to face in future. "Mastering this kind of technology is a great relief for the country and a big achievement," he said.

"The UPA government had initiated the ASAT program which has reached fruition today. I congratulate our space scientists & the visionary leadership of Dr Manmohan Singh," tweeted Patel. Several other Opposition leaders, including Mayawati, Mamata Banerjee and Akhilesh Yadav, have hit out at PM Modi for making the announcement allegedly to use it to reap political benefits ahead of the Lok Sabha elections.

Madhav, who is on a Jammu and Kashmir tour ahead of Modi's campaign rally here on Thursday, also said abrogation of Article 370 and 35A of the Constitution along with eviction of Rohingyas and return of Kashmiri migrant pandits to the valley are part of the BJP's manifesto. "You will find these in our manifesto," he said without commenting further when asked if his party still peruses these issues.

He said PM Modi has accorded high priority to the state and that is why he is visiting it on the first day of his poll campaign trail across the country.  "Jammu and Kashmir is very important to us. We have won three seats (Jammu, Udhampur and Ladakh) in 2014 and will retain these seats. We are also trying to strengthen our base in the valley," said Madhav.

Lashing out at the Congress for seeking support of the National Conference and Peoples Democratic Party in Jammu, he said, "You can understand the condition of the Congress which is banking on the support of these parties." "They (NC and PDP) are not ready to touch this party (the Congress) in Kashmir and the party pleaded before these parties in Jammu for support to fight against BJP," he said.

"The Congress is dependent on the votes of NC and PDP in Jammu region because they won't get any vote in the region. The entire vote will go to the BJP despite their alliance and we are confident of winning both the seats in Jammu region and the Ladakh seat with huge margins," he said. He said the BJP wants to strengthen democratic institutions in the state and wants an early assembly poll as well.

"We have strengthened the democratic system by having the Panchayat and Urban Local Bodies elections last year. Parliament elections are taking place and we have also demanded from Election Commission to hold early polls to the state assembly," he said. Asserting that Congress general secretary Priyanka Gandhi will not affect the BJP poll prospects, he said the whole country knows what would be the poll outcome.

Every body knows that the Modi government is returning to power once again, he added. "Priyanka is not campaigning for the first time. She had done it in previous three elections but the downslide of the party continued," he said, adding there is no alternative to Modi government in the country.

Referring to the Congress' promise of minimum income of Rs 72,000 a year to the poorest 20 per cent household in the country, Madav said the party is promising "moon" to the people  "The opposition is aware of this reality and they are trying to mislead the public by showing them moon," he said.