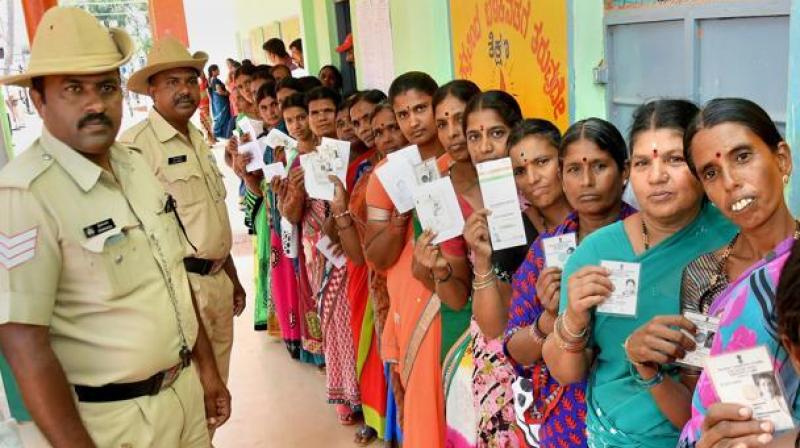 About 37 percent of the voters had exercised their franchise till 1 pm in the single-phase Karnataka Assembly election today. Voting for the fiercely fought polls began at 7 am and continued on a moderate to brisk note, poll officials said. According to the state electoral authorities, at 1 pm, the highest of 47 percent voting was recorded in Dakshina Kannada district, while Bengaluru urban had registered the lowest turnout of 28 percent. The officials said moderate to brisk polling was reported in the early hours from all over the state, with voters turning up in large numbers in Bengaluru city. The weather was pleasant with rains last evening bringing down the temperatures. A number of senior citizens were seen standing in the queue at various polling stations. State BJP chief and the party's chief ministerial candidate, BS Yeddyurappa, Karnataka Congress president G Parameshwara and former prime minister H D Deve Gowda, along with wife Chennamma, were among the first to cast their votes at Shikaripura in Shivamogga, Yaggere in Tumakuru and Paduvalahippe in Hassan district respectively. While Chief Minister Siddaramaiah, along with son Yatindra, cast his vote around 1 pm in his native Siddaramanahundi under the Varuna constituency in Mysuru, state JD(S) chief and former chief minister H D Kumaraswamy and his wife Anita cast their votes at Ketaganahalli in Ramanagara. Siddaramaiah, who offered prayers at the local temple before casting his vote, is contesting from neighboring Chamundeshwari and Badami in Bagalkote district of north Karnataka, while his son is contesting from Varuna, from where the chief minister had contested and won in 2008 and 2013. Siddaramaiah's political rivals are saying the chief minister decided to also contest from Badami, a constituency dominated by Kurubas, the community he belongs to, as Chamundeshwari will not be easy for him. "My son Dr. Yatindra Siddaramaiah & I have cast our vote in Varuna today. Karnataka voters as always will display political maturity & will begin a change that our country needs the most. Please go out & vote for an inclusive & peaceful Karnataka. #KarnatakaVoting (sic)," the chief minister tweeted after casting his vote. Sri Shivakumara Swamiji, the 111-year-old seer of a prominent Lingayat seminary, Siddhaganga Mutt, also cast his vote at a booth near the mutt premises. Former cricketer Rahul Dravid, who is the state election icon, another former cricketer Anil Kumble, actors Ramesh Arvind and Ravichandran as also the scion of the erstwhile Mysuru royal family, Yaduveer Krishnadatta Chamaraja Wadiyar, were among the early voters. Technical glitches in the electronic voting machines (EVMs) delayed polling at several places in Bengaluru. In one of the most bitter poll battles Karnataka has ever seen, the ruling Congress and the BJP have gone all out to woo the voters during their acrimonious campaigning that saw the big guns of both the parties crisscross the southern state. Polling is being held for 222 of the 224 Assembly seats, in a three-cornered contest between the Congress, BJP and Deve Gowda's JD(S). The election for the Jayanagara seat in Bengaluru has been countermanded, following the death of the BJP candidate and sitting MLA, B N Vijaykumar. The Election Commission (EC) has also deferred the polls at Rajarajeswari Nagar to May 28, after a massive row erupted over a large number of voter ID cards being found from an apartment in the constituency. Over 2,600 candidates are in the fray -- over 2,400 men and over 200 women.