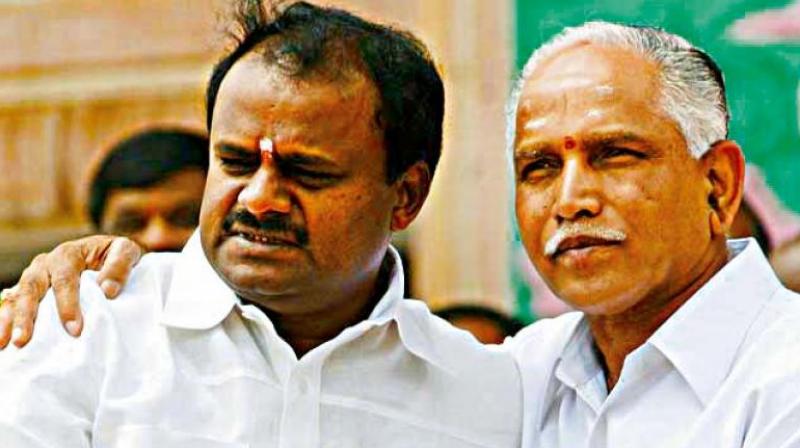 Two chief ministerial aspirants, BJP's B S Yeddyurappa and H D Kumaraswamy of JDS, today sought divine blessings as the polling process for the Karnataka Assembly elections was set in motion. The two leaders offered special prayers at temples for their success in the election, in which BJP is hoping to regain power and JDS is eyeing to be the "king", not just a "kingmaker."  Before leaving to exercise his franchise, Yeddyurappa with his party workers went to offer prayers at the 'Sankata Vimochana Anjaneya' at Shikaripura in his constituency. Former chief minister and number two in the JD (S) hierarchy, H D Kumaraswamy too sought the blessings of his family deity Bhairaveshwara at Adi Chunchanagiri Math at Vijayanagar in Bengaluru.

"Before going to cast my vote, I decided to seek the blessings of Lord Bhairaveshwara and the Adi Chunchanagiri seer (Nirmalananda Swami)," said Kumaraswamy. Adi Chunchanagiri is an important religious seat linked to the powerful Vokkaliga community. A Vokkaliga himself, Kumaraswamy and his party JD(S) main bank on Vokkaligas and minorities. Similarly, BJP's Badami candidate B Sriramulu, who is fighting the assembly election opposite chief minister Siddaramaiah, performed special 'Go-Pooja'. He worshipped the holy cow early morning before leaving to cast his vote.