When war is the canvas and world leaders are refugees

Gaping at a seed almost invisible to the naked eye through a microscope in a cold and quiet lab over several nights does not sound like... 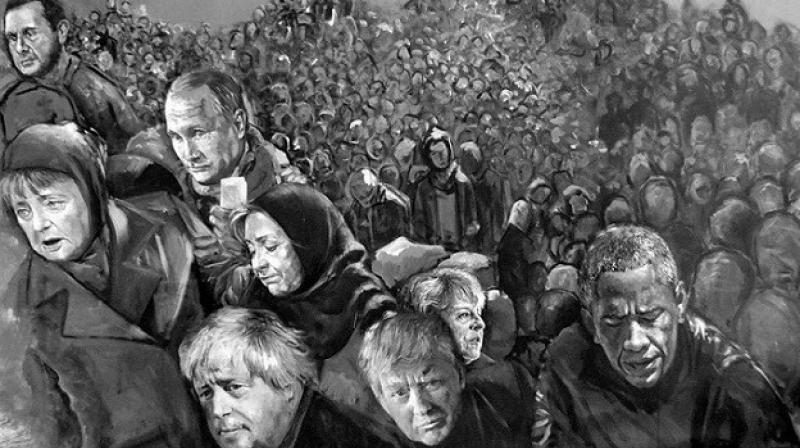 For Syrian artist Abdalla Al Omari, that's the leitmotif of not just his life but also his art. Five years ago, when Syria was on the brink of civil war, Omari left his homeland to take refuge in an asylum in Brussels. Driven by the anguish of displacement, he turned to his art to make an incisive political statement, portraying some of the world's most powerful leaders as refugees. The artist's imagination found shape in the solo exhibition titled "The Vulnerability Series", featuring fictionalized portraits of leaders like US President Donald Trump and Syrian President Bashar al-Assad in moments of despair. Portrayed Donald Trump as displaced and disheveled in The Vulnerability

It was an inversion of propaganda art, a paradox that conversely underscored the truth of war and bloodshed. As the series developed, I started empathizing with these characters that we are used to seeing as ultimately powerful. In actual, these leaders show no vulnerability and as a result, it is difficult to connect to these people on a human level," says the 31-year-old. In a video clipping sent to PTI, the Brussels-based artist says he was intrigued by the romantic idea of vulnerability and the impact it could generate. As he developed the series, eventually arriving at the 'paradoxical nature' of empathy, his aim shifted from expressing anger to the more vivid desire to disarm his figures, to picture them outside of their positions of power. I wanted to take away their power, not to serve my own pain but to give back those leaders the humanity and to the audience to see the work and decide what the power of vulnerability can achieve. It gives us the expression that moments of absolute powerlessness can also give you... absolute powers when you find people empathize with your personal story," he says. In his work, Omari tends to eliminate all suggestions of strength, charisma, and righteousness. Setting aside the hallmarks of autocratic visuals, he depicts them as vulnerable civilians. In "The Mediterranean", for instance, Omari paints Bashar al-Assad as a distraught refugee partially submerged in water, surrounded by a ravaging sea and an overcast sky. Similarly, in "Donald", the artist depicts the US president in a t-shirt along with a backpack and carrying a girl child in his arms. Omari tends to eliminate all suggestions of strength, charisma, and righteousness

In the portrait, Trump is holding a picture with a vivid expression of despair on his face. According to Omari, vulnerability is a more powerful weapon than guns and bullets. He says it is a human gift which we all should celebrate. "I have been totally convinced that vulnerability is the strongest weapon humans have. Way more powerful than guns and bullets. My message for world leaders is to see the works and see themselves... to think and maybe feel as well. The Art of Vulnerability and an Epidemic of Communal Trauma

"What does it mean to be vulnerable, a refugee displaced, besieged and someone who is facing injustice. They might relate to it at least when they see the series," he says. Launching his career in Damascus shortly after the outbreak of the conflict in Syria, Omari has been showcasing experiences of civilians, particularly children, who are caught in the crossfire of war in his paintings. The artist says his current series is driven by the idea of propaganda art. Omari has been showcasing experiences of civilians

He has particularly made use of propagandist images like one sees on political posters billboards while showcasing a political culture. "Propaganda art is very much connected to the primitive forms of propaganda which have been there since 500 BC. It has been working side by side with potential rising powers through history, praising the powerful, parties and governments in the political scene. A paradox that conversely underscored the truth of war and bloodshed

"I have sought to use the same approach in my series to show a totally different alternative of these popular leaders, bringing them very far from what the classical propaganda would imagine them like," he says. Omari also comments on the unfair role of media in depicting the Syrian crisis. The artist says through his series he wants to establish that art is not only for the elite. "The Syrian crisis depicted through media is extremely unfair. When you only talk about the number of people but ignore each and every person affected, it seems unfair. "I think when we will listen to these people we will have a different approach to the story of refugees. We just need a romantic approach to understand what we are as human beings and think about the universe more than countries and religions. Then we might have a better world," he says. "The Vulnerability Series" exhibition continues at Dubai's Ayyam Gallery till July 6.