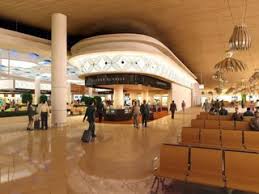 Mumbai, An Air India flight to Ahmedabad was delayed by nearly seven hours due to non-availability of the pilot, after which agitated passengers created ruckus at the Chhatrapati Shivaji International Airport here today. The flight -- AI 031 -- was scheduled to depart for Ahmedabad from Mumbai at 01:35 hours but left at 08:20 hours after a delay of nearly seven hours, a source at the airport said.

There were over 200 passengers on board the Boeing 777 aircraft.   "The flight was first delayed by one hour. Then the carrier further delayed it as there was no pilot available to operate the aircraft. When it did not take off until early morning, the agitated passengers created a ruckus in the boarding area and tried to obstruct staff members handling other flights," the source said. As the delay was notified in a staggered manner, the passengers had to spend the night in the boarding area itself, the source added. "The flight was delayed due to the flight duty time limitation (FDTL) issue and crew constraints," an Air India spokesperson said, adding that the flight departed for its destination at 0820 hours.   Duty hours for pilots and cabin crew are regulated by the Directorate General of Civil Aviation (DGCA) and they are barred from operating a flight beyond specific flying hours. PTI