You are and will always be my champion: Priyanka on Mary Kom's CWG victory 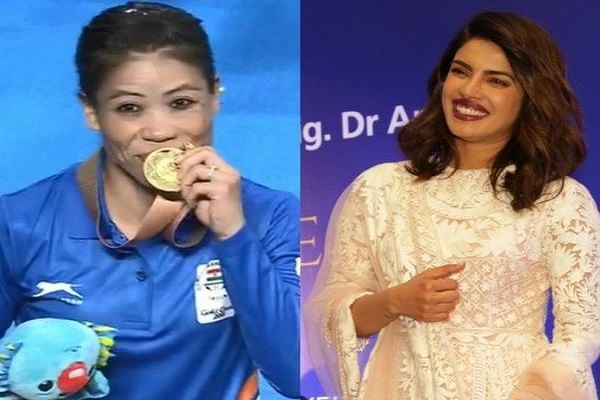 Los Angeles: Priyanka Chopra has congratulated boxer MC Mary Kom for clinching the gold medal at the ongoing Commonwealth Games, saying the legendary fighter is and will always be a "champion" for her.

The 35-year-old actor, who essayed the title role in the sports drama "Mary Kom", took to Twitter to praise the boxer after she scored her first CWG medal, a gold, in the women's 45-48 kg category at the games being held in Gold Coast, Queensland, Australia.

"I'm so proud of my friend and India's pride @MangteC you are and always will be my champion! Congratulations!! Yay!" Priyanka wrote, alongside Mary's photograph. The boxer thrashed Northern Ireland's Kristina O'Hara in the final bout to claim the medal, perhaps her last at the CWG.

The director of the 2014 film, Omung Kumar, also took to the microblogging site to congratulate Mary, 35. "Congratulations @MangteC for winning GOLD at #CWG2018 You were born to break records and create new history. Very very proud," Kumar wrote.

The film followed Mary's journey of becoming a boxer to her victory at the 2008 World Boxing Championships in Ningbo. PTI