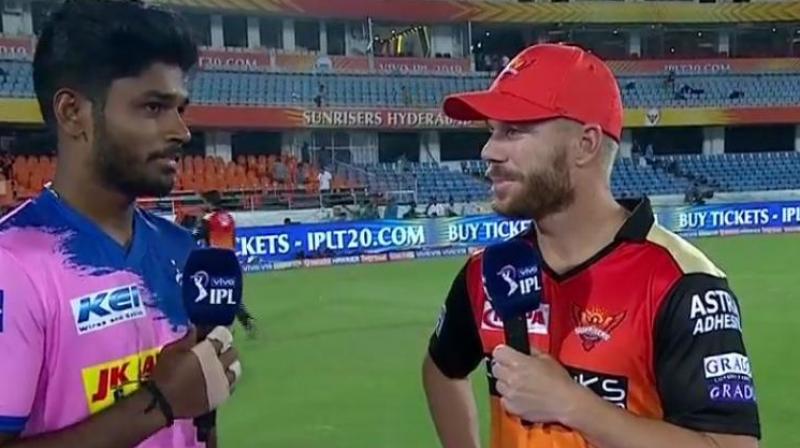 Hyderabad, Mar 30 (PTI) Sanju Samson's magnificent ton was overshadowed by David Warner's blistering half-century and the Indian batsman conceded that the Aussie spoilt his party. Samson's (102 not out) ton went in vein as Warner (69 off 37 balls) helped Sunrisers Hyderabad chase down a mammoth 199-run target to beat Rajasthan Royals by five wickets in an IPL match here on Friday night.

After the match, Warner interviewed Samson, who said probably a total of 250 might have saved Royals from losing the game.
"You destroyed my day. My 100 was not enough because of the way you batted. The way you started the innings we lost the game in the powerplay. We needed some 250 on the board with someone like you in the opposition. It was special," Samson told Warner. The 32-year-old Australian cricketer was all praise for Samson, saying he showed the way to bat on a tricky surface.

"We didn't get off to a good start, a serious innings from Sanju and full credit to him. He came out and played really well. He allowed himself time and the wicket got better. Actually, I didn't think it was a 200 wicket. We have played on similar wickets where if you bowl that hard length it is tough to get under. He showed us how to go about it," said Warner. Warner and Jonny Bairstow (45 off 28) set up the platform for the Sunrisers as they added 110 in the first 10 overs for the opening wicket.

"Me and Jonny have partnered really well since Kolkata. There have been a few hiccups with him trying to get off the mark. I have been hogging the strike a little bit, but over the years I have been held back a little bit. "We know this ground pretty well. We know the dimensions well. There has been a breeze from one side for the last two days but tonight it wasn't there. You have to be calculative with your batting," he said. Warner said he loves the local support here.

"One thing that inspires me is the local fans, they are amazing. We try and put on a good show. I enjoy playing in front of this crowd. They are fantastic."  Warner, who also got the Orange Cap for becoming the top run-scorer in the tournament so far, said: "It is orange, Sunrisers, why not.