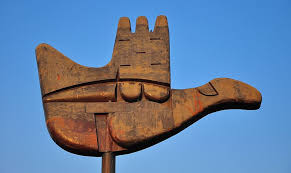 Since its inception in 1950s, the city beautiful, I mean Chandigarh, has thrived on its reputation of being one of the most modern cities in the world. Designed by Le Corbusier, a reputed architect of Swiss-French origin, the city beautiful has been praised across the globe for its architecture.

Well crafted sector system including sector 17 known as heart of the city, separation of â€?bazzarsâ€™ from residential areas, exclusive industrial and transport areas and many other unique features make the city stand apart from the other run of the mill stuff( cities).

But what has been troubling me is the â€?factâ€? that the city beautiful is dying. Cities do die. That is historical fact. There were cities known for their aura in the 19th century but are no more on the public mind.

The way people remained caught in traffic jams for several hours in the morning on Monday has hit the reputation of the city beautiful hard. The heavy rain played havoc with the city.

After having such a painful experience, all those who remained stuck up in jams, would not believe that it is one of the best laid cities having efficient road network.

The rain water was all over the place. Roads virtually turned into rivulets in furious spate. But this has not happened first time. Earlier also people have witnessed such a situation a number of times though the one they experienced yesterday was more acute in nature and substance.

The city is five decade old only. In such a short period it has started decaying. Its storm water system is unable to withstand even a brief spell of rain. As on Monday it experienced a record rain fall in a few hours, the cityâ€™s water draining system collapsed in no time. It took hours to drain out the water at the cross section of sector 45 and other places even after the stopping of the rain. Sector 45 was virtually looking like a big lake.

But that is not all. Notwithstanding its most modern lay out and road network, it has become one of the slowest cities in the country. In fact, life in this city has started crawling.

Vehicular traffic moves at the snailâ€™s pace in almost all parts of the city. Most of the roundabouts have been replaced by the red lights. One has to stop the vehicle after travelling every half mile to wait for a green light to move ahead.

It takes 45-50 minutes to cross the city from one end to other in normal days. During festival season or other special occasions, it takes more time. It is most difficult to drive in this city in the early hours of morning, at noon and then late in the evening. Driving through the city has become unnerving experience.

There are people who say that the city is over burdened by people and its infrastructure is unable to take the increasing population load. It is difficult to agree with the people who advance such an argument.

There are cities with much bigger size of population in this country and other parts of the world. But most of these are free from such troubles such as traffic jams. There would be people who would not agree with my contention that this city is dying.

They must be having their own arguments in support of their contention. But I am certain in my conviction that this city has started decaying though it is one of the youngest cities in the world.

Obviously, those who have been administering this city for the past five decades or so are responsible for turning the city beautiful into a snake pit. Usually old cities vie for heritage status but the city beautiful, which is the youngest of the lot, has been trying hard to get one. In fact, some of its buildings have already declared heritage sites.