Brar Threw Himself At Badals’ Feet After Offering To `Fix’ Them: Capt Amarinder 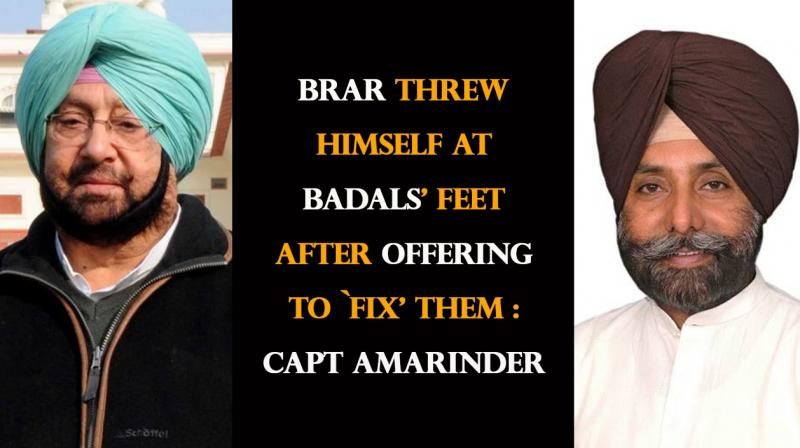 Brar Threw Himself At Badals’

Chandigarh, April 19: Reacting to the former MP joining the Shiromani Akali Dal (SAD), Punjab Chief Minister Captain Amarinder Singh on Friday mocked Jagmeet Singh Brar’s opportunistic, last-ditch resort to rescue his political career after failing to wriggle his way back into the Congress. Citing a series of WhatsApp messages received from Brar over the last several weeks, Captain Amarinder said the former MP was apparently desperate to get back into politics and had decided to go with the Badals, whom he promised “to fix in Punjab” if the Congress agreed to take him back.

It was obvious, said the Chief Minister, that Brar had a political agenda to further and was ready to do it by hook or by crook. The former MP had, for the last several weeks, been trying unabashedly to get into the Congress but, with the party high command refusing to intervene and he (Captain Amarinder) himself not responding to any of Brar’s desperate messages, the former MP had decided to throw his weight behind the SAD, said Captain Amarinder.

Clearly, said Captain Amarinder, Brar had decided to throw himself at the feet of the very Badals whom he was promising “to fix” after his (the Chief Minister’s) persistent refusal to acknowledge and respond to the former MP’s desperate messages. The Congress was better off without such opportunistic and self-seeking individuals, said the Chief Minister, quipping sarcastically that he hoped Brar would be more loyal to the Badals than he had been to the party that had been instrumental in making his political career. 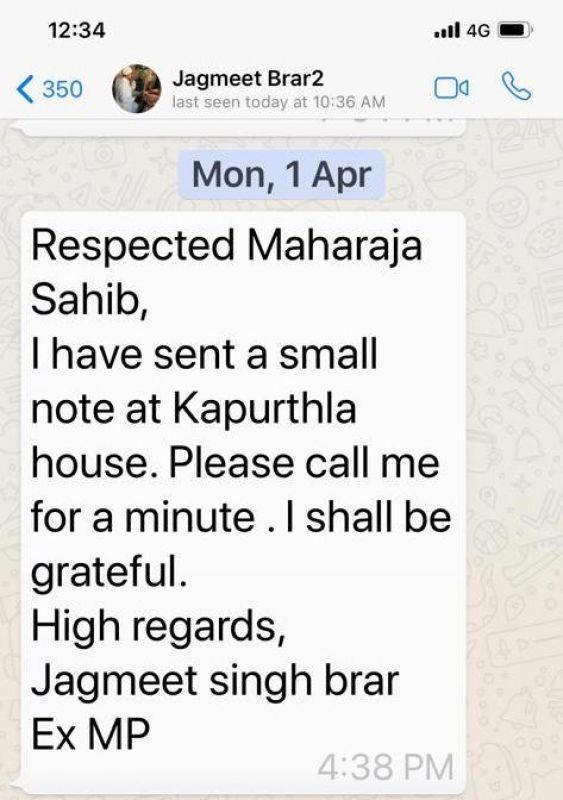 The Chief Minister also took a dig at the Badals for embracing Brar out of sheer frustration in the face of their imminent defeat in the LS polls, scheduled to be held in Punjab on May 19. They (the Badals) must be equally desperate, he said, to take in a carpetbagger like Brar, he added. Brar, who had earlier served as Congress Working Committee (CWC) member and later joined the All India Trinamool Congress (TMC), was expelled from the Indian National Congress on November 2016 for his anti-party remarks.

It was laughable, said the Chief Minister, that Brar had joined SAD just 10 days after seeking forgiveness for his acts and promising to give his `remaining years’ to ‘Maharaja of Patiala’ and to `fix the Badals in Punjab’. Brar wrote to Captain Amarinder on April 9 (sic): “Respected Maharaja Sahib, Forgive me my sins. Sir Dr Md Iqbal says, “Gunagaar hoon, Kafir nahin hoon mein. I will always stand behind you and give me remaining years to Maharaja of Patiala. Let Navjot embark on the India election campaign, rhetoric and silly. Keep me by your side. I will fix Badal’s in Punjab. Yours devotedly,”

The apology and offer were part of a series of messages to the Chief Minister - from seeking appointment on March 22, 2019, to offering unconditional joining on March 31, to sending a note at Kapurthala House in Delhi on April 1, to seeking forgiveness on April 9, to giving his remaining years to the Maharaja of Patiala with the offer to fix Badals in Punjab. Brar’s last message was as recent as April 11, when he finally gave up any pretext of wanting to be a loyal soldier of the Congress led by Captain Amarinder in Punjab and exposing his true intent of wanting a ticket to fight from Bathinda.

The message read (sic): “Respected Mahraja Sahib, This request is neither a condition nor selfish demand joining you. Foresight demands that if at the last moment due to political compulsions, the High command fails to find a suitable turbaned Jat Sikh candidates for BATHINDA, I offer myself to contest provided you recommend by case. I will win this seat. High regards, Jagmeet Singh Brar Ex-MP.”