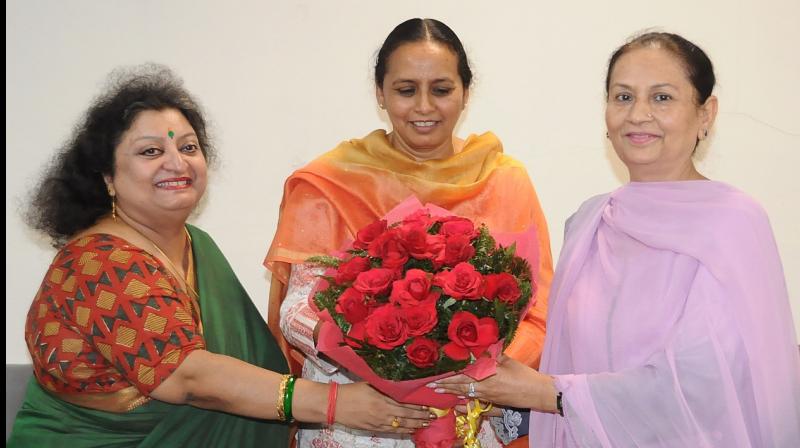 Chandigarh, June 14: The Social Security, Women and Child Development Minister, Punjab, Mrs. Aruna Chaudhary today presided over a meeting with the senior officers of the department in which all the District Programme Officers of the State were also present. The minister reviewed the various schemes for the welfare of children and women and directed their effective implementation.

In the marathon meeting here today at the committee room of the Punjab Civil Secretariat-2 in Sector-9, Mrs. Chaudhary minutely reviewed every scheme and decided to conduct a similar meetimg every 2 months with the District Programme Officers while the senior officers would conduct such meetings every month. The minister was welcomed at the start of meeting by the Prncipal Secretary Mrs. Raji Shrivastava while the Director Mrs. Gurpreet Sapra conducted the proceedings.

The minister directed officers to ensure zero laxity in the safety of both women and children and further directed the effective functioning of the ‘One Stop Centres’-set up for the victims of exploitation and crimes. Divulging more, Mrs. Chaudhary said that as of now, 5 such centres are under construction in 5 Districts which explains why they are being run in the hospitals as interim arrangements. The minister also said that the identity of the victim of any crime must be kept a secret and requisite legal and medical assistance should be rendered. 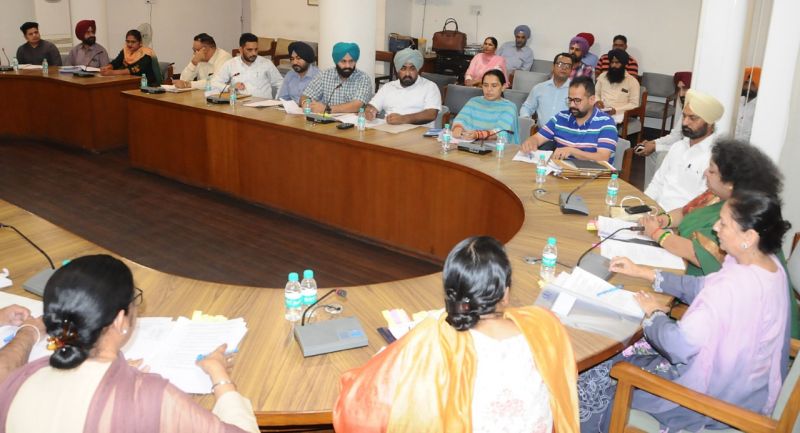 Similarly, the minister also took stock of the ‘Working Women Hostel’ scheme for the women working in the big cities. The land has been identified for such hostels in Patiala, Jalandhar, Amritsar and Ludhiana whereas in Mohali the land identification is yet to done. The minister also gave instructions for the speedy implementation of the project and also exhorted the officials to cover other big cities under the scheme. The minister termed this as yet another big step in the direction of women safety.

Reviewing the lack of infrastructural facilities in the Anganwadi Centres, Mrs. Chaudhary directed the prompt redressal of the issue. The minister enquired about the vacant posts of Helpers and Workers at the centres District wise and ordered immediate filling up of these at the District level. The minister also batted for establishing coordination with the Education Department and effective running of pre-primary classes and also directed that the teachers would themselves come to teach in those anganwadi centres which are far away from the schools.

On the issue of diet schedule of the children and the required ration in the anganwadi centres, the minister said that she would brook no compromise with the dietary needs of the children and no child should remain devoid of nutritious diet. Proper coordination must also be maintained regularly with the Health Department to ensure robust health of the children.

Mrs. Chaudhary expressed satisfaction at the results of the last year Poshan Abhiyan and Pradhan Mantri Matru Vandana Yojana and exhorted the officers to strive for achieving the reducing the rate of stenting in children upto 6 years of age from 38.4 to 25 percent by 2022. The minister also directed all the District Programme Officers to send the cases with regard to the annual awards given by the Union Government under Poshan Abhiyan.

Mrs. Chaudhary exhorted the departmental officers to make sure the running of Poshan Abhityan this year too in a successful manner.The minister said that the Pradhan Mantri Matru Vandana Yojana is being run since 1st July, 2017 in all the 22 Districts of the State and under the scheme, a sum of Rs. 5000 is given in three installments for improving the health and nutritional standard of the pregnant women and lactating mothers.

The minister also added that till now, Rs. 75.98 crore have been given to the women in the state while a budgetary provision of Rs.33.14 crore has been kept for the scheme under 2019-20 and till date, 1,98,659 beneficiaries have been enrolled on the scheme portal.On the occasion, the minister directed all the District Programme Officers to frame a comprehensive plan for procuring funds under the Nirbhaya Scheme and send the same to the Union Government.

Mrs. Chaudhary further instructed the officers to initiate out of the box steps in order to implement at the grassroots level the ‘Beti Bachao, Beti Padhao’. The minister also wholeheartedly supported the training of girls in self defence techniques. Similarly, Mrs. Chaudhary also rooted for the plantation of some of the total 550 saplings at the time of the 550th Parkash Purb celebrations of Sri Guru Nanak Dev Ji at the hands of the families of new born girls.

Among others present in the meeting included Joint Director of the Department Mr. Charanjit Singh Mann, Deputy Director Mr. Gurjinder Singh Maur, Rupinder Kaur and Mr. Amarjit Singh apart from the District Programme Officers from all the Districts.