Deadliest Attack in Srinagar in This Century Till date, More Than 40 Dead 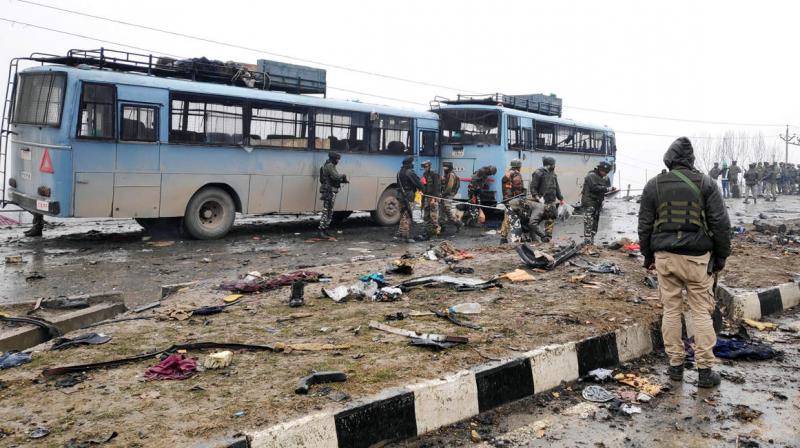 Srinagar: In the deadliest attack since the beginning of this century, more than 40 CRPF personnel were killed and many more injured when a Jaish terrorist rammed a Scorpio car laden with more than 350kg explosives into an Army convoy at Awantipora in Pulwama district of Jammu and Kashmir on 14th February. The explosion site is 20 kms from capital Srinagar. Earlier in 2001, terrorists had similarly rammed a Tata Sumo into the main gate of J&K State legislative Assembly,

killing 38 people on 1October. Yesterday’s attack has claimed more casualties than that, and many more are critically injured. The target of the explosion was a 78 vehicle convoy of Army, carrying 2500 CRPF men on Srinagar Jammu highway. Regular security checks were done before the convoy passed from the blast site, and it has been termed as a ‘serious breach of security’ by the authorities. The injured have been moved to army base hospital in Srinagar.

Blasted vehicle parts and charred remains of the dead were seen strewn around the blast site, in the site photographs. The ‘fidaayeen’ terrorist is claimed to be one Ail Ahmad Dar, aka ‘Waqas Commando’, a 20 year old who left his home and was last seen in March last year. He reportedly left, to join Jaish-E-Mohammed.

The Centre has condemned the attack and has demanded "Pakistan stopped supporting terrorists and terror groups operating from their territory." It also appealed "international community to support the proposal to list terrorists, including Jaish-e-Mohammed Chief Masood Azhar, as a designated terrorist under the 1267 Sanctions Committee of the UN Security Council."

Prime Minister Modi tweeted from his official handle saying "The attack on CRPF personnel in Pulwama is despicable. I strongly condemn this dastardly attack. The sacrifices of our brave security personnel shall not go in vain. The entire nation stands shoulder to shoulder with the families of the brave martyrs. May the injured recover quickly". Home Minister Rajnath Singh will be visiting Srinagar today to take note of situation on the ground.

The attack will be probed by National Investigation Agency along with J&K Police. It is to be noted, that this attack has exceeded the barbarity of attack on Army brigade Headquarters, in the wee hours, causing 19 deaths.