If voted to power, NC will review cases against J&K youth: Omar Abdullah 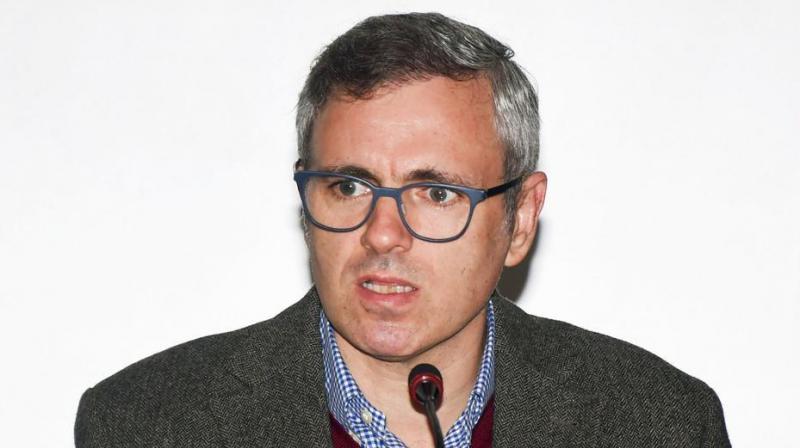 Rafiabad (JK), Apr 4: National Conference (NC) vice-president Omar Abdullah Thursday said cases registered against Jammu and Kashmir youth since 2015, after the PDP-BJP alliance came to power in the state, would be reviewed and the FIRs cancelled if his party is voted to power. Addressing an election meeting here in Chijhama village of Rafiabad in north Kashmir's Baramulla district, Abdullah said he wanted to create an atmosphere in Jammu and Kashmir where people could talk freely.

"There are cases against our youth under which they are called to police stations even today. The NC government will review each case, one by one, registered against our youth right since 2015 and especially of 2016 (unrest) and afterwards and cancel their FIRs so that our youth are set free," he said. Cases were registered against several youths in the valley during the unrest which followed the killing of Hizbul Mujahideen commander Burhan Wani in an encounter with security forces in Kokernag area of south Kashmir's Anantnag district in July 2016.

"We want to attract our people towards us, we want such a situation here where we can talk to each other freely and address the problems of this state. I want to see that day when we would not need this (concertina) wire and rope when we come to see each other, when we would not need policemen or security," the NC leader said. "(I want to see) a day when if I make some mistake, you would come and hold my collar and ask me, 'Omar, we had given you an opportunity to serve us and represent us but why didn't you'. We want return of that Kashmir which has been snatched from us," Abdullah said.

Referring to the state's accession with the Union of India, he said the NC wanted restoration of terms agreed upon by the two sides at that time. "We want restoration of those powers on the basis of which our accession took place and which have been gradually taken (away) from us and against which conspiracies are going on even today," he said. Hitting out at Peoples Democratic Party (PDP) president and former chief minister Mehbooba Mufti, Abdullah said the people of Jammu and Kashmir could not rely on her for safeguarding the state's special status.

"I was in the parliament when a debate was going on (ahead of trust vote in July 2008) and two members were given the opportunity to talk about the state -- me and Mehbooba. I spoke for about five minutes and said whatever I could, but when the Speaker asked Mehbooba to speak, she said 'what can I say?' and sat down. Do we need such representatives who go there and stay silent?" he asked the gathering. He said the NC is the only party which can safeguard Jammu and Kashmir's special status.

Abdullah also reiterated his promise of revoking the controversial Public Safety Act (PSA) in the state if his party returns to power. "The NC has made a promise to the people of the state to remove PSA under which our youth are arrested. If God wills and NC forms the government, I promise you that we will remove this law. I am not saying that we will not use it, because if someone else comes after me, then he will use it," he said.

Abdullah asserted that his party would fulfil its promise unlike the PDP. "We will not even change its (PSA) nomenclature like the pen and inkpot people (party symbol of the PDP) did with (special) task force. In 2002, Sayeed said they will disband the task force. But what did he do after he came to power? He changed its name but kept it as it was. It has same functions and same officers, but a new name like old wine in new bottles," he said. "We will not change PSA's name, we will wipe it out from this state so that our elders and mothers do not need to go to police stations to look for their children," he said.