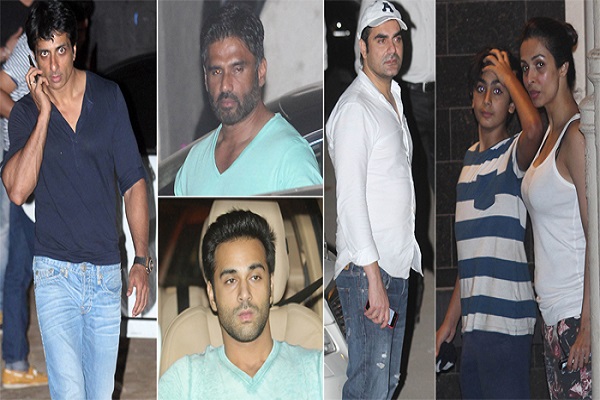 Mumbai: Following the conviction of Salman Khan in the 1998 blackbuck poaching case by a Jodhpur court, a host of industry friends dropped at the superstar's residence to meet his family.

Family members including brother Sohail and Arbaaz, brother in law Aayush Sharma were at Salman's Galaxy Apartment in suburban Bandra. Soon after the judgment was announced Congress leader Baba Siddiqui rushed to the actor's house. Arbaaz's ex-wife Malaika and her sister Amrita Arora, "Race 3" producer Ramesh Taurani, Sonakshi Sinha, along with her parents Shatrughan and Poonam Sinha, Sneha Ullal and Daisy Shah were seen visiting his residence. Sonakshi, Sneha and Daisy were launched in Bollywood as actors by Salman.

Filmmaker Sajid Nadiadwala, who is a close friend of the the 52-year-old actor, cancelled the success party of his latest release, "Baaghi 2 , and left for Jodhpur. After the verdict, fans had gathered outside the "Sultan" actor's house. Police constables were also stationed outside the building. Actor Varun Dhawan, who was in Delhi to promote his upcoming film "October", tweeted, "I know for a fact that Salman bhai and his family have the utmost respect and faith in our judiciary system. Salman Khan is one of the strongest and most genuine people I know and I'm sure he will come out of this stronger." PTI